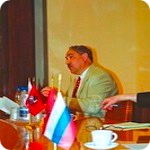 James W. Warhola is Professor Emeritus of Political Science at the University of Maine. His research interests focus on comparative politics (especially on Russia, Turkey, and Eurasia more generally), politics and religion, politics and ethnicity, and political theory.  In 2012 he published “Russian Autocracy Redux: Path Dependency and the Late Modern State” in The University of Pittsburgh’s Carl Beck Papers in Russian and East European Studies. He has also published in Oxford University’s Forum for Public Policy, The Journal of Church and State, the American Journal of Political Science, The International Journal of Politics, Culture and Society, and numerous others. He has published monographs including Politicized Ethnicity in the Russian Federation: Dilemmas of State Formation.  He served in the Faculty Senate of the University of Maine (1993-2011), on its Executive Council (1995-1996 and 2007-2011), and served as its Vice-President in 2010-2011.  Dr. Warhola has been a Visiting Research Scholar at Bilkent University, Ankara, Turkey (2010), Emory University (2007), Moscow State University (1995), and Baylor University (1991). He spoke at the Pell Center for International Relations and Public Policy (Salve Regina University, Newport, RI) in November 2011 on the theme of Turkey and the contemporary Middle East, and at numerous other venues in the USA and abroad.

Publications include “The Return of President Putin and Russian-Turkish Relations: Where are they Headed”, Sage Open Publications, and “War and Peace:  Russia, Turkey, and the Domestic Dimension of Conflict Perpetuation, Cessation, and Resolution in The Caucasus,” The Journal of Eurasian Studies, Istanbul University, Istanbul, Turkey. Professor Warhola serves on the Editorial Council of  The Journal of Church and State and also the Journal of Academic Perspectives and is a member of the Advisory Board of The Keston Center for Religion, Politics, and Society (Baylor and Oxford Universities).  In Spring 2002 Dr. Warhola was named the 2002 Distinguished Maine Professor.

ARTICLES:
The Kremlin’s Religion Temptation (PDF, 105 Kb)
Religion and Politics Under the Putin Administration: Accommodation and Confrontation within “Managed Pluralism” (PDF, 1.4 Mb)
Changing Rule Between the Danube and the Tatras: A study of Political Culture in Independent Slovakia, 1993 – 2005 (PDF, 408 Kb)

and by far the most significant . . .
The latest news on OHIO STATE football….