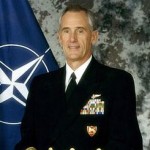 Admiral Gregory G. Johnson (Ret.), ’68 is a retired United States Navy Admiral and the former commander of U.S. Naval Forces, Europe and Allied Forces, Southern Europe. After graduating from the University of Maine, Admiral Johnson attended Aviation Officer Candidate School, was commissioned in 1969, and designated a Naval Aviator in 1970. What followed was a long and distinguished military career. From 1976-1990, Johnson held sea duty assignments in carrier based squadrons deploying in USS Independence, USS Nimitz, and the USS Forrestal. He served on the Joint Chiefs of Staff as the Head of the European Command/Central Command Branch of the Joint Operations Division (JOD). He served as Executive Assistant to the Chairman of the Joint Chiefs of Staff, General Colin L. Powell. Admiral Johnson is the recipient of numerous decorations and awards including the Defense Distinguished Service Medal and the Navy Distinguished Service Medal. Upon his retirement from the Navy in December, 2004, Johnson started Snow Ridge Associates, a strategic advice and consulting firm. He serves on the Advisory Board of the School of Policy And International Affairs at UMaine, as well as the Vice Chair for the University of Maine Board of Trustees.