Renewable Energy from the Tides

Maine is one of the most promising places in the world for tidal power. Gayle Zydlewski and Teresa Johnson are leading an SSI research team to help ensure that tidal power is developed in ways that promote economic development and protect marine ecosystems as part of the Maine Tidal Power Initiative. 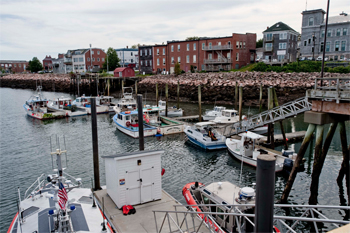 The researchers are collaborating with local, state and federal stakeholders and energy developers to address concerns including how underwater turbines affect marine life and fisheries and the potential of tidal power development to create jobs in economically depressed regions.

The SSI team’s goal is to create a model process that communities in Maine and elsewhere can use to make informed decisions about developing tidal power in local waters. Findings also will be used by state and federal regulators to guide tidal power development and will inform the sustainable development of this renewable energy resource worldwide.

Over the next year, the SSI team and collaborators will expand their research in several areas to help inform decision-making about tidal power development in Cobscook Bay and other sites in Maine. UMaine physical oceanographer Huijie Xue is characterizing the energy resource of Cobscook Bay, which will help determine where future turbines should be placed and how they will affect tidal currents. Xue and Zydlewski are also working collaboratively to examine how fish respond to different hydraulic conditions associated with the presence of a turbine.

Johnson and Jansujwicz will survey a larger population of residents in Eastport, Lubec, and other communities around the bay to gain deeper insight into public opinion about the social acceptability of tidal power in the region. The SSI team will continue to share findings with a diversity of stakeholders to help inform decisions about the sustainable development of tidal power in Cobscook Bay.

Ultimately, the team’s findings will help guide decision-making for stakeholders including regulatory agencies, communities investigating the potential of this technology at various scales, and ORPC, which is developing tidal power in Eastport.