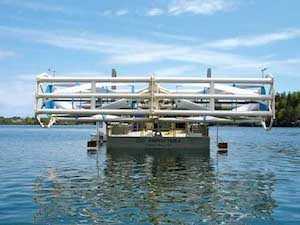 Growing concern over global climate change and energy security has accelerated the development of new renewable energy sources. In the search for alternatives to fossil fuels, marine hydrokinetic (MHK) energy has emerged as a viable option. However, while energy from marine tides, currents, and waves may all hold immense potential for electrical energy generation, the developing industry is faced with significant challenges—the most notable being the regulatory uncertainty that is considered the primary non-technical obstacle for the widespread development of new tidal and wave energy technology in the U.S.

Across the U.S., wave and tidal energy projects are currently in the conceptual or early design stage and research to date is generally focused on theoretical aspects or the interactions of small-scale deployments Consequently, there is limited data to assess potential environmental effects of emerging technologies and little practical experience with which to inform the permitting of commercial-scale developments that will likely have different interactions with the marine environment.

Yet, despite this significant uncertainty, agency regulators are increasingly confronted with the need to make licensing decisions to support new tidal and wave energy development while, at the same time, ensure that potential environmental consequences are adequately addressed.

The primary tool used by regulatory agencies to consider environmental consequences of proposed projects is Environmental Impact Assessment (EIA). In theory, the EIA process represents a key interface between science and regulation, providing regulators with a systematic approach for utilizing existing knowledge and for ensuring that new scientific knowledge is effectively generated and disseminated. In practice, however, the EIA framework is often a poor fit in the marine renewable energy context.

From the industry perspective, high costs of environmental studies often seem out of proportion to the size of the project. Agency institutional constraints (including capacity and staff turnover) affect the ability of agencies to respond as the pace of marine renewable energy development increases. And, the slow development of the science required for project permit applications concomitantly slows the EIA process and effectively increases both the time and expense for developers and regulators. This has led to growing pressure to refine the regulatory and permitting process so that it is more cost effective and proportional to risk.

This Mitchell Center project addresses these concerns. Specifically, we aim to identify regulatory barriers to the continued development and long-term sustainability of the tidal power industry and to examine how scientific information is produced and used in the regulatory and permitting process.

By focusing on the development, uptake, and transferability of environmental monitoring protocols and mitigation activities, our social-ecological systems research will help to understand and inform the decision-process for responsible tidal energy development, particularly as projects move from single devices to arrays to commercial-scale development. This project supports the necessary first steps of team building and grant proposal development in the context of recently renewed interest in next-generation tidal energy technology development in Maine.