Less waste, but is it safe? Anticipating risks in food waste recovery

Sometimes when we try to solve one problem, we end up creating others unintentionally. Environmental engineer Jean MacRae leads a Mitchell Center research team investigating potential contaminants so that food waste can be recycled safely. 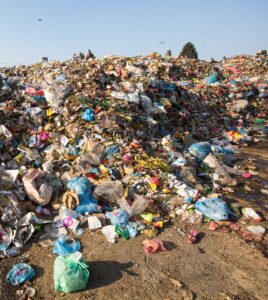 In the United States and around the world, more than 30% of the food we produce is wasted each year, and most of it ends up in landfills. This means not just wasted food, but lost energy, water, and other resources, along with increased greenhouse gas emissions as food waste breaks down.

Meanwhile, landfills are filling up, and siting of new ones is often problematic due to land use restrictions, public health concerns, and the fact that no one wants a landfill in their backyard.

“The major downsides of using landfills are made much worse by disposing of food waste in them,” notes Jean MacRae, UMaine associate professor of environmental engineering and member of the Mitchell Center’s Materials Management team. “If more food waste is diverted and used for a better purpose, that’s good for everybody. It means that landfills last longer, and have fewer negative impacts,” she says. And it also means that less methane—a potent greenhouse gas—is produced in landfills as organic materials break down.

“Organic” here means carbon-based, which could include a wide variety of materials such as hay, sawdust, grass clippings, or manure, as well as food waste. 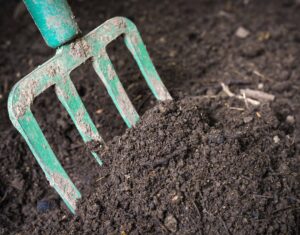 Composting and anaerobic digestion provide ways to ‘close the loop’ and move toward what’s called a circular food economy. Making food systems more circular means that the nutrients and energy in foods are recovered and recycled rather than just thrown away.

But food and organic wastes can also contain other things—both visible and unseen—that can carry risks for people’s health and the environment. Examples might include heavy metals such as cadmium or lead, chemicals such as pesticides and herbicides, pathogens such as bacteria and viruses, and physical materials such as plastics and glass. Some of these chemicals can bioaccumulate, or increase in concentration, as they move up the food chain, increasing the risks they pose. These potential contaminants may be naturally found in foods and the soils they are grown in, but may also enter the food system through use in agriculture and food packaging, and from other kinds of materials that get included in the food waste stream.

As part of the Materials Management team’s ongoing work to reduce food waste and promote a more circular food economy, Jean MacRae led a research project that investigated potential contaminants in food waste to see what the risks may be, how food waste processors perceive these risks, and potential ways to reduce them, so that food waste recovery can be done in a safe, sustainable way.

Working together to find solutions

The Materials Management team has worked closely for several years with a large, diverse group of stakeholders in Maine—from grocery store managers and municipal leaders to policy makers and waste haulers. Early on, the group reached a strong consensus that getting food waste out of landfills is Maine’s most urgent solid waste management need.

Skyler Horton, who worked with environmental anthropologist Cindy Isenhour on the food waste research as an undergraduate, says that working closely with stakeholders shaped what they did and how they did it. “It wasn’t some arbitrary scientific hypothesis that we were testing,” he says. “We were actively involved with stakeholders, talking to people about what was needed and how the research could help.” He adds that this is one of the most valuable parts of his experience on the team, and of being part of a Mitchell Center project.

Cindy, an associate professor of anthropology and climate change at UMaine, is also part of the Materials Management team. She notes that there is a strong trend in the U.S toward using regulations to keep organic wastes out of landfills, and such diversion is now required in some states, including Vermont and Massachusetts. One question raised by stakeholders was whether regulations could also work in Maine, and if being required to separate out food waste from the solid waste stream affects the types or levels of contaminants in food waste collected for recycling.

For this project, a team of faculty and student researchers collected samples of food waste in Maine, Vermont and Massachusetts from six types of sources—grocery, hospital, school, restaurant, retirement community and residential.

Testing of samples was led by Jean MacRae and conducted largely by Astha Thakali, who was then a master’s student at UMaine and is now an environmental engineer. They analyzed the collected samples for physical debris such as paper, plastic and glass, plus heavy metals, halogenated organic compounds, bacterial pathogens, and antibiotic-resistance genes (ARGs).

Astha notes that this project is one of the first to look for these four classes of contaminants together in food waste.

ARGs are a growing concern as overuse and misuse of antibiotics have led to genetic resistance to existing antibiotic drugs in some bacteria that cause disease. A group of halogenated organic compounds, more commonly known as PFAS, are used in a wide variety of food packaging, water-resistant clothing, nonstick cookware, and many other consumer products.

Some contaminants—heavy metals and bacterial pathogens—were found at levels below limits set by health authorities.

More concerning were ARGs. Genes for resistance to two common antibiotics were found in nearly all food waste samples, though at low levels. Genes for resistance to colistin, one of the antibiotics that’s relied on when others are not effective, were not found. Jean notes that ARGs are a big concern in wastewater treatment but have received much less attention in food waste recovery. This project is one of the first to look at ARGs in this setting.

PFAS chemicals were perhaps the most concerning and were detected in more than half of the samples. These chemicals have potential adverse health effects, persist in the environment (they’re often called “forever chemicals” for this reason), and can bioaccumulate.

Researchers also compared the test results from Maine, where no food waste collection requirements are in place, with Vermont and Massachusetts, and the results from different sources of food waste. Results showed no strong relationship between the types or levels of contaminants and whether or not regulations were in place, or between different food waste sources.

“Composting and anaerobic digestion of food waste are major steps forward in terms of sustainability. We need to emphasize that there are risks here, but they can be managed.”

Researchers led by Cindy Isenhour surveyed and interviewed food waste processors to learn more about how they perceive contamination risks, potential risks they may not anticipate, and what strategies they are using—or may find useful—to mitigate them. For the survey, Skyler Horton created a database of licensed food waste processors from each state, which included operations of various sizes and models (e.g., privately owned, public-private partnership). In addition, he assisted Cindy in analyzing survey results and conducting follow-up interviews.

In survey responses, physical debris such as glass and plastic, and things like grit or grease that could get caught in nozzles or screens, were mentioned the most. Invisible or unseen contaminants such as bacterial pathogens, PFAS, or ARGs, were barely mentioned. However, processors did express concerns about unseen contaminants in interviews.

The team notes that although food waste processors would likely be held accountable and their businesses could suffer if contaminants were found in their finished products, it’s challenging to detect and identify contaminants without significant costs. One respondent who expressed concern about pathogens stated, “you cannot see them, we do not test for them and they likely present the highest liability issue, however remote that might be.” Some processors also noted in the survey and interviews that they aren’t the source of contaminants, and that problems with chemicals are pervasive in our food and natural systems.

What can food waste processors do?

Researchers also asked what processors have done, or could do, to prevent or at least limit contamination in their operations and end-products.

Processors listed strategies that target the steps before source materials are received at their facilities—such as not accepting certain types of materials like sawdust, horse manure, or food waste with packaging—as most effective. Strategies to control contamination after receipt of materials were seen as less effective.

Educating waste generators about keeping the waste stream as clean as possible was also mentioned as an important strategy. As one respondent noted, “…especially when it comes to food scraps, education is our best and most effective method” for dealing with potential contaminants.

Jean notes that there is a gap in knowledge of how the processes of composting or anaerobic digestion could affect contaminants in finished soil amendments. As of July 2020, for example, Astha had found just a few research papers in the United States on PFAS in compost products, and no research on whether or not these chemicals are broken down in biological processes such as composting. Testing food waste samples before processing, and the finished material after processing, is one next step that the team will consider.

No one wants to discourage the recovery of food waste, Cindy notes—it’s crucial that we get food waste and other organic materials out of landfills. “Composting and anaerobic digestion of food waste are major steps forward in terms of sustainability,” she says. “We need to emphasize that there are risks here, but they can be managed.”

Funding for this research was provided by the Environmental Research and Education Foundation.