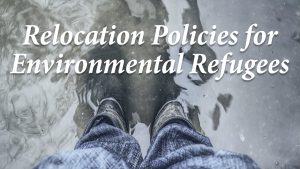 Today as climate change makes areas less hospitable (specifically along global coastlines), relocation is becoming an increasingly more viable adaptation strategy. In fact, whole communities have begun planning to relocate, or have relocated. At the national level, some governments have started to draft relocation policies. When governments omit communities from these decision-making processes, however, they fall into the trap of making policies about what they think people need and want based on assumptions. These often become widely circulated in the media and policy circles and eventually are seen as facts that are difficult to undo. Using Fiji as an example, Bertana explores the assumptions embedded in the “environmental refugee” discourse to show how they are dictating relocation policies and outcomes.

Amanda Bertana is a Postdoctoral Fellow for the Scholars Strategy Network, Maine Chapter. Her primary area of research is on the human dimensions of global environmental change and its effects (flooding, coastal erosion, more frequent and intense storm surges) on local communities. She has done extensive ethnographic fieldwork in the Fiji Islands looking at ways the Government of Fiji is assisting rural coastal communities with relocating as an adaptation response to coastal erosion.