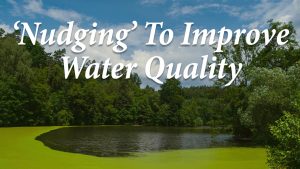 Popularized by the best-selling book “Nudge: Improving Decisions about Health, Wealth, and Happiness”, governments around the globe have developed “nudge squads” in an effort to  use behavioral science to achieve pro-social behavioral change at little or no cost. Most of the existing research has focused on individuals making choices that effect their own wellbeing. Yet often people’s decisions to helping society and the environment involve significant personal costs. This talk will focus on the results from recent large-scale economic experiments that have sought to use behavioral economics nudges to modify behavior that can improve water quality.

Kent Messer is the S. Hallock du Pont Professor of Applied Economics at the University of Delaware. Messer is also the co-director of the USDA-funded national Center for Behavioral and Experimental Agri-Environmental Research (CBEAR). He is the Project Director of Delaware’s EPSCoR Track-1 project, entitled “Water in the Changing Coastal Environment of Delaware”. Messer received his BA from Grinnell College in Iowa, his MS in Resource Policy and Behavior at the University of Michigan, and his PhD in Resource Economics from Cornell University.

As a behavioral economist, Messer is engaged in cutting-edge research and outreach efforts related to applying behavioral science and experimental design to the nexus of agriculture and the environment, such as conservation programs, eco labeling, and water security issues. He has published over 75 peer review publications, served as editor of the Agricultural and Resource Economics Review and associate editor for the American Journal of Agricultural Economics. Messer has been an investigator of research proposals worth over $75 million from numerous sources including NSF, EPA, NOAA, and USDA. His recent book “The Science of Strategic Conservation: Protecting More with Less” was published by Cambridge University Press in 2018.