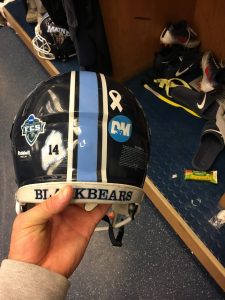 Sponsored by Male Athletes Against Violence at The University of Maine

The White Ribbon Campaign is a week-long campaign sponsored on our campus by Male Athletes Against Violence (MAAV). This campaign involves the distribution of white ribbons to men on our campus. Wearing a white ribbon is a personal pledge never to commit, condone nor remain silent about violence against women. By establishing a week for men to visibly show that they are against the issues of rape, domestic violence, and sexual abuse, we believe that MAAV can have a positive effect on the attitudes and behaviors of men on our campus. We, the members of MAAV, are proud to be part of an international campaign by organizing this event on the University or Maine campus.

A Little Bit About the White Ribbon Campaign

What is the White Ribbon Campaign (WRC)?
The WRC is the largest effort in the world of men working to end men’s violence against women. It relies on volunteer support and financial contributions from individuals and organizations.

What does it mean to wear a white ribbon?
Wearing a white ribbon is a personal pledge never to commit, condone nor remain silent about violence against women.

What happens during White Ribbon Week?
We urge men and boys to wear a ribbon, including one on their coat so the ribbon will be visible while they’re outdoors. We encourage men to talk in schools, workplaces, and places of worship about the problem of violence.