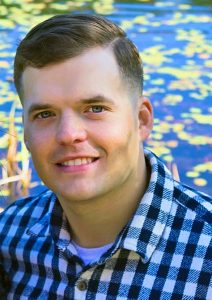 As Zachary nears the end of his undergraduate career at UMaine, his achievements go far beyond the classroom as an entrepreneur, innovator, and Innovate for Maine Fellow.

After graduating from Mt. Blue High School, he immediately enlisted in the Army and traveled the world while serving our country. When he decided it was time to return to school, he chose to come home to Maine.

“For me, this was the best choice all the way around, from academics to clubs and sports,” Zach says of his choice to enroll at UMaine.

It wasn’t until halfway through his undergraduate career that he discovered the Foster Center for Student Innovation. After hearing about the Innovation Center from a faculty member, he decided to stop by. From that point on, he has been a regular face around our building as both an Innovation Engineering student, intern, and entrepreneur.

His first business venture was Exposure T-Shirts, which utilized a unique way of “printing” designs onto clothing through UV light. After deciding this wasn’t an idea he was really passionate about, he focused his energy on starting Dog Company Nutrition, an idea he worked on for one of his Innovation Engineering classes. Then, an opportunity arose for another startup that he couldn’t pass up. Taking what he learned from starting the first two businesses, he cofounded a new company.

ClearWater Data, his newest business venture, utilizes blockchain technology that enables distributors and customers to verify their products throughout the various parts of the supply chain. Through this technology, they strive to verify the integrity and authenticity of products that are shipped.

“Think of the Maine Seafood industry. People fake Maine seafood every day. Our goal is to combat this kind of problem and return the trust back to the consumer,” explained Zachary. Faking Maine seafood is simply not good for the Maine economy. Additionally, “studies show that customers are willing to pay up to 20% more for products if these products can be verified as authentic.”

In the midst of running these businesses, he decided to apply to be an Innovate for Maine Fellow.

“I knew some of the involved companies and I was very interested. I wanted to work with a company I could learn from.”

Through this program he was placed with RxOption, a company that has developed an app that tells people which generic drugs they can use in place of brand name prescriptions and where to find them and for the lowest cost. In this role he worked as their Marketing and Sales Director where he focused on figuring out the niche market and tailoring the marketing strategy around it.

When asked what he learned, his answer was simple; above all, he learned a lot about himself.

“I learned a lot about my own strengths and weaknesses,” said Zachary. “I am much more organized today because I had to be.”

So, as Zachary comes to the end of his time here at UMaine, I asked him to reflect on a few things.

What was the most valuable part of your experience with the Innovation Center and Innovate for Maine?
“Being involved with the entrepreneurship network around the state. I met so many people and everyone has been so willing to help out.”

What do you want to do when you graduate?
“Business entrepreneurship, for sure, and ideally in the state of Maine.”

Finally, what advice would you give to new students just starting out at UMaine?
“I would definitely try and experiment with things that are new and uncomfortable to help you grow. Join different clubs or sports. You’ll never know what you like if you don’t take risks.”

The moral of Zachary’s story is this; push yourself to do more, learn more, and fail more. That’s one of the best ways to grow as an individual and find your passion.