Maurice Michaud Biography:   Maurice Michaud was the son of Belonie and Ida Violet-Michaud. He was one of twelve children, 6 boys, and 6 girls, Maurice was the second oldest of the boys. He was born in Van Buren, Maine, on November 26, 1998, and he died September 26, 1967. He was a land surveyor “arpenteur” by trade, did extensive surveying in the St, John Valley and surrounding towns. Also did some forestry surveying and forest management. He was a skilled draftsman, had a room in his house with a large drafting table where he drew maps of the land and parcels he surveyed. Some of his maps are still being used today by surveyors. He also did a little masonry work on the side, he had a knack for constructing outdoor fieldstone rock fireplaces. He had a small laboratory in his parent’s house, where he did some research and experiments in chemistry. He was well educated, had nice handwriting, and was very fluent in English. He also got involved in town and state politics, on a small scale. Maurice was a bachelor, lived with his parents for many years, and eventually built his own house across the street from his parent’s house where he lived alone the rest of his life. 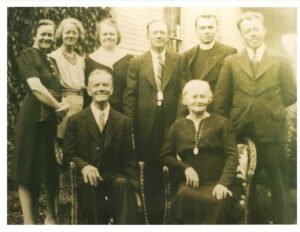