Joyce received a B.S. in Biology from the University of Michigan in 1960 and worked during the following year for Professor F.K. Sparrow, eminent student of the zoosporic fungi. She then attended Indiana University under the direction of Sparrow’s former Ph.D. student, Robert Johns. Longcore received a Masters of Arts and returned to Ann Arbor to work for Professor Sparrow before marrying in 1964. After marriage, she worked for Sparrow from the University of Maryland laboratory of another of his former students, Robert Paterson. She then became a full-time housewife and mother until beginning graduate school at the University of Maine in 1984. Dr. Richard Homola, student of Alexander Smith and a specialist of Basidiomycetes, was her major professor while she pursued a Ph.D. studying chytrids. She received a doctorate in 1991 and was fortunate in being allowed to maintain space in the then Department of Botany and Plant Pathology. Currently she is an Research Scientist in the School of Biology & Ecology, where she studies zoosporic fungi and maintains cultures of diverse chytrids and their allies plus cryopreserved isolates of the amphibian pathogen Batrachochytrium dendrobatidis. She furnishes cultures for research and teaching. 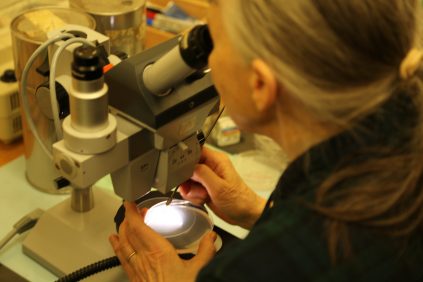