A Biography by Douglas Rooks 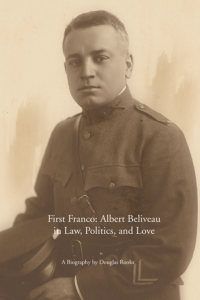 “Few biographies exist of first- or second-generation French-Canadian descendants in the United States. First Franco shares the life story of a prominent Maine jurist of French-Canadian descent. This richly detailed book adds to our understanding of the migration experience in the United States, particularly about the integration of French speakers into U. S. society. In its portrayal of Albert Beliveau as a first-generation Franco-American, this biography teaches us a great deal about such themes as acculturation, the rise from the working class, and the development of political consciousness among Maine’s largest ethnic group.” – Mark Paul Richard, State University of New York at Plattsburgh

Hardcover, with color dust jacket. Page size: 6.5″ x 9.5″
262 pages, with a gallery of photographs and other illustrations

To order, go to our online store here.