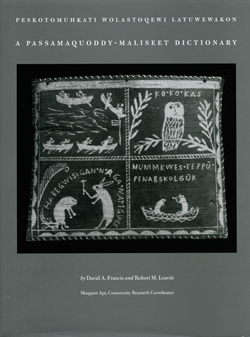 The Passamaquoddy and Maliseet have lived in the region which now includes eastern Maine (United States) and western New Brunswick (Canada) for thousands of years. Among the first Native peoples to have contact with European voyagers to North America, the Passamaquoddy greeted Samuel de Champlain at the mouth of the St. Croix River in 1604. Passamaquoddy territory embraced the watershed of this river, which today forms the easternmost segment of the U.S.-Canadian border. Maliseet territory consisted of the adjacent St. John River watershed, to the east, and extended northward into present-day Québec. The two peoples’ names for themselves indicate their origins in these territories: the Passamaquoddy are peskotomuhkatiyik, “people who spear pollock,” a fish abundant in coastal waters; the Maliseet are wolastoqewiyik, “people of the St. John River.” Today there are Passamaquoddy and Maliseet communities on both sides of the border. Although they share a common language, the two peoples are distinct political entities.

This dictionary of Passamaquoddy-Maliseet is the result of more than thirty years’ collaboration among native speakers, educators, and linguists. The 18,000 entries illustrate speakers’ detailed knowledge of the physical, intellectual, social, spiritual, and emotional environments in which they live. Sample sentences in the entries, taken from both oral tradition and contemporary conversation, present details of Passamaquoddy-Maliseet thought and culture, personal attitudes, humor, and linguistic ingenuity.

A comprehensive English side helps users of the dictionary discover shades of meaning and patterns of word formation in Passamaquoddy-Maliseet. The dictionary also contains a brief grammatical sketch of the language, pronunciation key, and guides to noun forms and verb conjugations.

“For nearly half a century many individuals, including myself, have been committed to making sure that the next generation has the tools and methodology essential to their own creativity in future endeavors. This dictionary stands as the centerpiece of our commitment.” – from the Foreword by Wayne A. Newell

“In our view, the dictionary represents a Sacred Bundle containing ancestral teachings, values, beliefs, and worldviews. The dictionary also symbolizes a ‘language bank’ complete with savings, investments, and assets for present and future generations. It is our good fortune to witness the gift of generosity from Elder David Francis for his time, language expertise and pure love of his and our treasure, Passamaquoddy-Maliseet language! We continue to be blessed in observing the genius of our esteemed friend and colleague Robert Leavitt for his vision to shield our treasure from extinction. We are forever grateful for their collaboration and their labor of love for the language.” – from the Preface by Imelda and David Perley

Note to bookstores: Textbook discount on this title

THIS BOOK IS CURRENTLY OUT OF STOCK.

As a child, David A. Francis never wanted to learn English, but his love of language led him to fluency in both English and his native Passamaquoddy. After serving in the US Army in World War II, he returned to Sipayik, in eastern Maine, where he served a term as tribal governor, and later was Community Action Program director, housing commissioner, and language curator and translator at the tribe’s Waponahki Museum and Resource Center. He lives at Sipayik with his wife of nearly 60 years, Marian, and their many children, grandchildren, and great-grandchildren.

Robert M. Leavitt began working with the Passamaquoddy language in the 1970s and first met David A. Francis when he was curriculum developer for the Passamaquoddy bilingual education program at Indian Township. He is professor emeritus of education at the University of New Brunswick in Fredericton, where he was director of the Mi’kmaq-Maliseet Institute for fourteen years. He has written extensively about Passamaquoddy-Maliseet language, culture, and history, often in collaboration with David A. Francis.

Margaret Apt grew up at Sipayik, where her first language was Passamaquoddy. Her work at the tribe’s museum and on the dictionary project have given her ideal opportunities to fulfill her responsibility to learn and pass on the language, culture, and traditions, as she was taught. She teaches Passamaquoddy at Shead Memorial High School, in Eastport, Maine. As a wife, mother, and grandmother she is also passing the language and traditions on through her family.