Managing the ecosystem of Maine streams

Hamish Greig, an Assistant Professor of Stream Ecology, is collaborating with foresters, economists and watershed scientists from the University of Maine and Maine logging industry leaders to study Riparian Management – When foresters leave trees that shade a stream to protect its ecosystem.

“A riparian buffer is the area of forest adjacent to a stream that a forest-harvester leaves to try and protect that waterway,” said Greig.

Greig and his team acquired one of nine UMaine Interdisciplinary Undergraduate Research Collaborative (IURC) grants to continue a study led by Ethel Wilkerson, an aquatic ecologist with the sustainability non-profit organization Manomet, documenting the impact of various wood cuts around streams. Greig hopes to understand the economic and ecological costs and benefits of the practice. The project also received funding from the Cooperative Forestry Research Unit on campus.

“There was this exciting landscape experiment that we could never afford to do as a small research group at the University of Maine, but by partnering with these other agencies and forest companies, we could further develop this experiment,” Greig says.

In the Maine wilderness

During five- to seven-day trips, Hamish’s team, undergraduates Kathleen Brown and Ethan Cantin and graduates Eric Miller and Mitchell Pasiker, camped at the former sites to collect data on how streams have been affected by various woodcuts. The research team traveled about 900 miles roundtrip from campus to each site then back, according to Greig.

The previous study cut several 15-acre blocks of stream up to 11 and 24 meters adjacent to a stream and some sites were cut completely to the stream. Hamish and his team went back to each site from the previous study and took measurements of the stream’s habitat, water quality, insects, leaves falling into the stream, algae and other variables.

“We are fortunate they had control streams where they didn’t harvest at all,” he says. “Those are the ones we compare the harvested streams to and we can also compare our results to those from 17 years ago. So, we have these sort of two different ways of comparing the outcomes.”

Results are being interpreted and data collection is likely to continue into the coming years, he says. 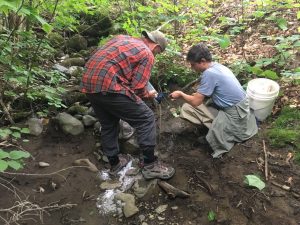 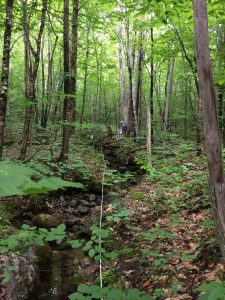 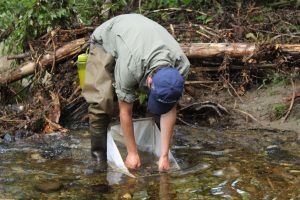 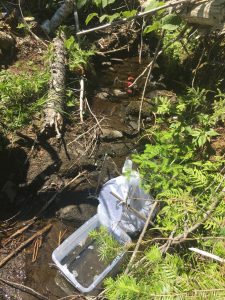 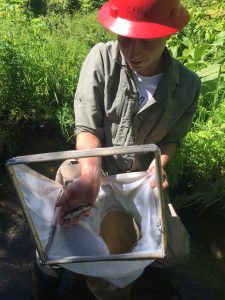 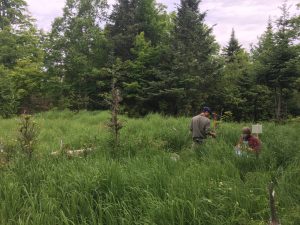 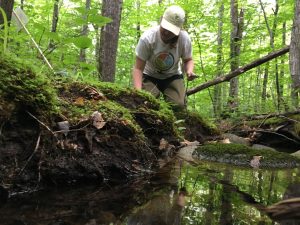 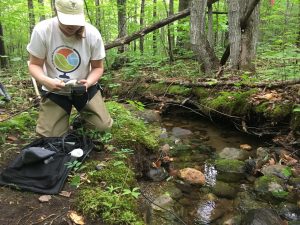 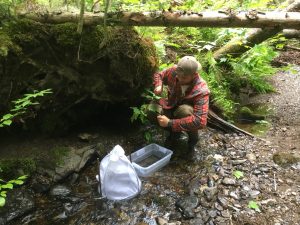 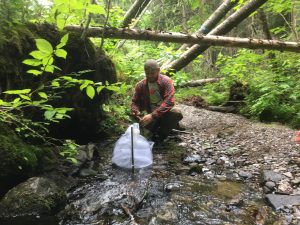 Students faced obstacles while conducting their field research, including bears eating some of their traps and destructive floods. They learned how to adapt to sudden changes to keep the research alive.

“They were solving problems on the fly, which is one of the hardest things about doing research – work out what to do when what we think will work doesn’t,” Greig says.

Ethan Cantin, an Ecology and Environmental Sciences major from Peru, Maine, says he didn’t know when he enrolled at UMaine that undergraduates worked on research projects.

“I didn’t think undergraduates did research significantly. It’s definitely something I learned once I entered EES (Ecology and Environmental Sciences),” Cantin says.

He had less intense research experience in previous classes before applying for the research assistant position on this project. Cantin, who gained experience working in field and lab settings, says he got involved with EES because he enjoys being in the woods. He enjoyed camping and collecting data focused on macroinvertebrate species in the streams.

“It was like a long weekend for me, I enjoy doing camping, outdoorsy stuff like this. So, it made the summer fly by,” Cantin says.

Students also collaborated with people in the logging industry and campus organizations. Manomet, a sustainability non-profit organization with offices in Brunswick Maine and elsewhere, helped locate the prior study sites and logging companies granted students permission to use roads to gain access to the sites.

“This project has given the opportunity to work on interdisciplinary questions in terms of linking natural resource economies with the ecological resources but it’s also giving the students an opportunity to interact with a wide range of institutions,” says Greig.