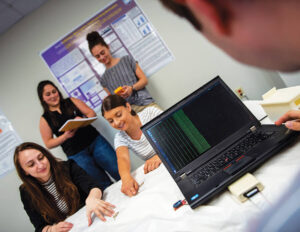 The University of Maine was recently issued a patent for a device that detects brain injury by measuring sleep movement patterns. This technology will be licensed by Activas Diagnostics, a UMaine spinoff company. The invention is a fitted mattress sheet equipped with more than a dozen sensors that gather information about sleep-wake and respiratory patterns while a person sleeps in their own home rather than in a sleep study facility. The SleepMove monitoring system has the potential to detect early symptoms of mild cognitive impairment and Alzheimer’s disease. The UMaine inventors are Marie Hayes, professor of psychology, and Ali Abedi, assistant vice president for research, and professor of electrical and computer engineering.