The Senator George J. Mitchell Center for Sustainability Solutions at the University of Maine has partnered with the city of Waterville and a coalition of three central Maine towns to advance the Food Rescue MAINE campaign aimed at ending food waste in Maine.

Waterville will launch a community food recycling program with a June 17 family event at the George J. Mitchell Elementary School near the newly designated food recycling drop-off site at the I-Recycle facility on Armory Road. Readfield, Fayette and Wayne will launch a joint food recycling and composting program later this month at the Readfield Transfer Station on Recycle Road. The towns are part of a growing statewide movement to reduce municipal waste disposal costs and improve soil, air and water quality by recycling discarded food into compost or biogas.

Food Rescue MAINE is a statewide food waste education and action campaign funded in part by the Maine Department of Environmental Protection’s (DEP) food waste diversion program and spearheaded by a Mitchell Center team comprised of faculty advisers and student interns from several Maine colleges and universities. The project slogan, “Maine Food-Too Good to Waste,” is a call to action.

Food waste is not currently accepted in Waterville’s curbside or drop-off recycling programs or at Readfield’s drop-off transfer facility, which is also used by residents of Fayette and Wayne. Offering food waste recycling will reduce municipal solid waste streams and the disposal fees assessed to residents in addition to encouraging the best and highest use of the state’s food resources according to the DEP food hierarchy — feeding people and animals. In Readfield, household food waste will be incorporated into an existing yard waste recycling operation, which will provide high quality compost to home gardeners in Readfield, Fayette and Wayne. 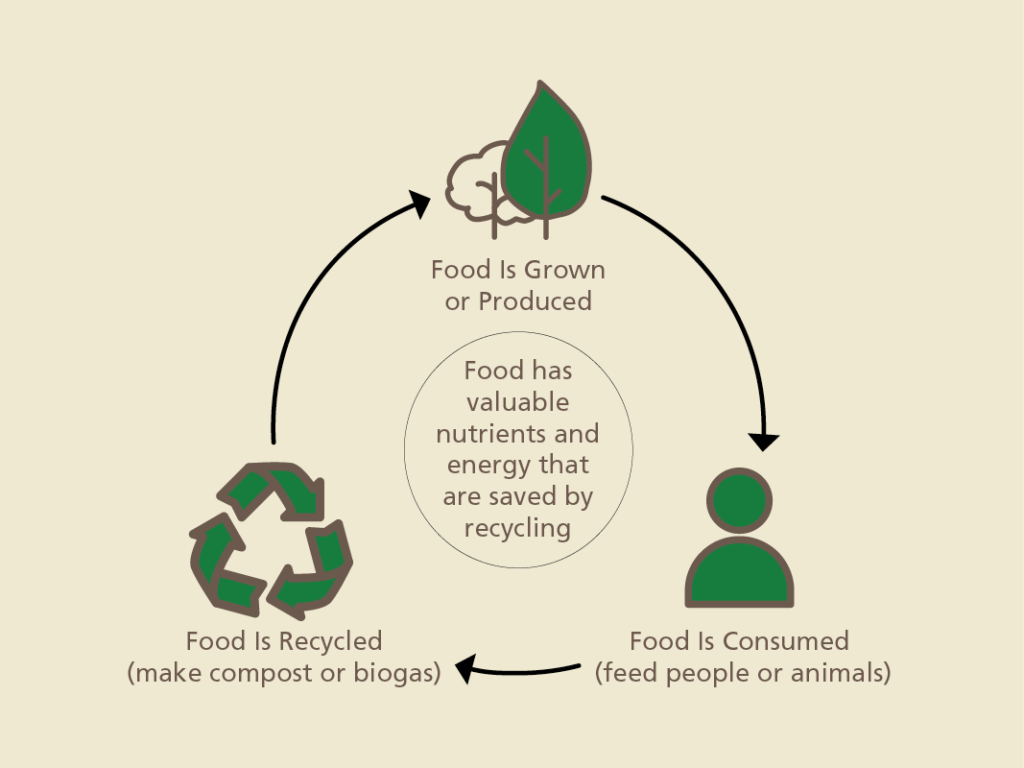 Administrators in Waterville and representing the three-town alliance are enthusiastic about their new food recycling initiatives which are expected to generate financial and environmental benefits.

“Waterville is very excited about the potential benefits to our community, including savings on our solid waste costs,” says Waterville’s Public Works Director Matt Skehan.

As part of the campaign, the Mitchell Center team has developed a variety of materials available to participating towns and the public to build awareness of and support for community food rescue and recycling programs. Resources include a new web portal, a social media platform, and a library of recycling information, signage, flyers and videos. A school outreach program is also being piloted at select Maine elementary and high schools.

“They brought a wide range of expertise to the table. Their involvement helped to educate and inform our key decision makers and get the project off the ground. The education component will continue to include our residents and end users of the program,” says Dyer.

Other municipalities working with the Mitchell Center to promote food recycling initiatives include Winslow and Portland; both opened community food waste drop-off sites on Earth Day 2021. Mitchell Center researchers will quantify the economic and environmental benefits realized by eliminating food from the solid waste stream by analyzing food waste data collected in Winslow and at the five drop-off sites in Portland.

Skehan is pleased that Waterville’s municipal leaders have signed on as a food recycling pilot location, and notes that the city’s mayor, Jay Coelho, will be at the launch on June 17.

“We’re happy to work with UMaine’s Mitchell Center as they provide important educational resources to help our community learn about the economic and environmental benefits of food recycling.”

For more information about the June 17 event in Waterville, contact Public Works, pw@waterville-me.gov.