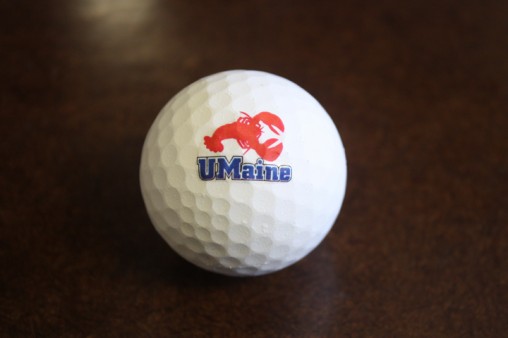 ORONO, Maine — Golfers on the high seas can breathe a little easier — and so can the marine life around them — thanks to researchers at the University of Maine. In conjunction with The Lobster Institute, UMaine Biological and Chemical Engineering Professor David Neivandt and undergraduate student Alex Caddell of Winterport, Maine, have developed a biodegradable golf ball made from lobster shells. The ball is intended for use on cruise ships.

Carin Poeschel Orr, who earned a master’s in marine bio-resources at UMaine, suggested the idea to Bob Bayer of The Lobster Institute. Bayer turned to Neivandt, who is known on campus as an innovative problem-solver.

Though biodegradable golf balls already exist, this is the first to be made with crushed lobster shells with a biodegradable binder and coating, creating value from waste material.

“We’re using a byproduct of the lobster canning industry which is currently miserably underutilized — it ends up in a landfill,” Neivandt says. “We’re employing it in a value-added consumer product which hopefully has some cachet in the market.”

And that cachet doesn’t come with a higher price tag. Biodegradable golf balls that are now on the market retail for a little under $1 per ball. The raw materials for the lobster shell balls cost as little as 19 cents per ball.

Caddell, a golfer, says the balls perform similarly to their traditional, white-dimpled counterparts. And they can be used with both drivers and irons.

“The flight properties are amazing,” Caddell says. “It doesn’t fly quite as far as a regular golf ball, but we’re actually getting a similar distance to other biodegradable golf balls.”

UMaine has filed a provisional patent for the lobster-shell mixture, which can also be used for such products as plant pots that decompose in the ground, surveying stakes and other applications.

For Caddell, a junior Biological Engineering major and Honors student, the opportunity to do research that has a real-world application has been a highlight of his UMaine experience.

“I didn’t really think it would turn out to be this fruitful,” Caddell says. “I think what really makes UMaine great is that there is a lot of funding available here, as opposed to private schools where it’s hard to get research opportunities. Here, all sorts of professors are willing to take on students. You’re not just taking classes, you can be surrounded by engineering by doing research, as well.”