Roger Milliken meditates on the ethics of industry 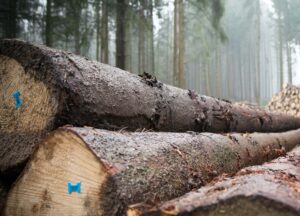 On November 28, Roger Milliken, in a talk hosted by the Senator George J. Mitchell Center for Sustainability Solutions, discussed the conflict between western culture and the sustainability of life on Earth from his unique ethical perspective as a Maine forest manager and environmentalist.

“Now that I am retired, I feel less torn by, and therefore more free to talk about, the conflicts between economics and care for nature,” Milliken said. “To find solutions, we need to candidly face the causes of the mess we have made.”

Milliken is the former President and CEO of Baskahegan Company, which owns and manages the Milliken family’s 150,000 acres of forest in and around the Baskahegan Valley of Washington County. Equal parts conservationist and forester, he has co-chaired campaigns by The Nature Conservancy to raise $64.5 million to protect 185,000 acres along the Saint John River and the 40,000-acre Debsconeag Lakes Wilderness Area. A former trustee of the Maine chapter of The Nature Conservancy, he chaired the Conservancy’s global board from 2008 to 2011.

“Roger has a deep ethical commitment to the natural world and, among other things, to the Indigenous communities whose lifeways are inseparable from that world,” Dr. David Hart said in his introduction to Milliken’s talk.

Milliken has always had a vested interest in Maine’s forests, partly because its past, present, and future is intertwined with the story of his own heritage. Milliken’s family has owned land in the Baskahegan Valley for over a century and Milliken published a book chronicling the history of the region and his family’s company, “Forest for the Trees: A History of the Baskahegan Company,” in 1983 and again in 2017.

Lessons rooted in the past

One of Milliken’s core arguments is that the destruction of the natural world and degradation of humans’ quality of life is a result of a western culture rooted in “individualism, separation, and dominion.” Milliken did not pull this claim out of thin air or tabloids, but from his own family’s history.

Baskahegan Company was founded by Milliken’s grandfather who, in 1920, bought 100,000 acres of timberland in the Baskahegan Valley, planning to reap as much from the land as possible to recoup his investment. However, he ran out of wood after only 6 years. It took three decades for the forest to grow back, at which point Milliken’s father, and Milliken himself by extension, approached harvesting the land much more conservatively. They focused on removing smaller, diseased, or imperfect trees, thereby increasing the nutrients and sunlight available for the “dominant” trees and improving the overall value of the forest.

“In my father’s mind, we were rebuilding the value and productivity of the resources. In mine, we were helping the forest heal from past abuses. In practice, these two approaches were the same,” he said.

Describing the state of the planet, Milliken explained that there are two definitions of “apocalyptic”: one definition is in the traditional sense of catastrophe, the other is in the sense of a revelation, the follies of humanity coming to a seemingly inevitable conclusion. Milliken suggested that the apocalyptic events that have plagued communities all over the world with increasing regularity, be it floods, wildfires, or droughts, are lifting “a veil that had obscured the truth” of what humans have done and what they are doing to their home. 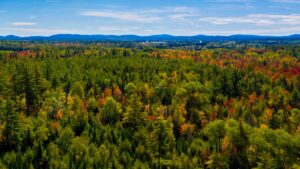 A stand for reciprocity

Despite the lessons handed down by his ancestors’ experience of the imperative to first care for the land, Milliken continued to feel the pressure of so-called market demands for greater returns on investment from a host of figures throughout his time at the head of Baskahegan. Wall Street investors in the form of Timber Investment Management Organizations emerged mid-way through Milliken’s career and rewrote the playbook on profitably managing Maine’s forests, squeezing whatever they could from the landscape and turning around what was left for real estate.

Just before his retirement, Milliken and Baskahegan entered the carbon market, agreeing to maintain Baskahegan’s significantly improved stocking of trees and the carbon therein, for 100 years. In this decision, Milliken’s family sought to reject attitudes of separation and dominion and channel a faith in the reciprocal relationship between humans and the natural world, a faith that settlers rejected more than four centuries ago when killing or expelling the Indigenous people who first occupied the land now called Maine.

Milliken explained that these values are not new; the tribes that still hold them today continue to protect their own lands from western, capitalist influence.

“Indigenous peoples are 4% of the world’s population; they control roughly 20% of the world’s land, and that 20% supports 80% of the world’s biodiversity, a biodiversity that includes hermit thrushes and loons,” Milliken said. “In the face of these facts, whose culture is ignorant and primitive? Who best understands what it takes to live well in this place, on this planet?”

At the end of his talk, Milliken said that few other commercial forest landowners had made similar commitments to sequester carbon on their land. To that point he raised a question: if markets will not demand that the planet be sustained for future generations, who will?

For nearly a decade, the Mitchell Center has hosted its Sustainability Talks series during the fall and spring semesters, providing students, faculty, citizens, and others in and outside of the University of Maine community with opportunities to learn about the multi-faceted nature of sustainability problems from the researchers, professionals, representatives, and every-day people finding innovative ways to address them. Recordings of past talks are available online.