Linda Silka’s transformation from a conventional social and community psychologist into the interdisciplinary, bridge-building and problem-solving role she fills at the Mitchell Center began in 1994 at the University of Massachusetts-Lowell.

“I started out doing straight social psychology research and teaching first-year general psychology students at UMass Lowell,” Silka says. “That’s all I knew how to do. I’d done four years of graduate school studying social psychology and then only talked to other people in my small research group.” 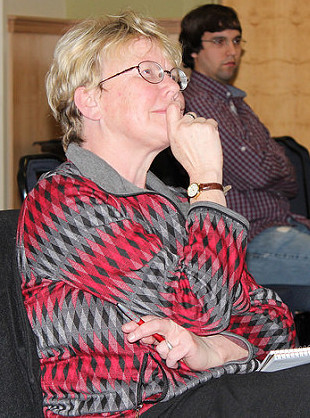 But a bit of serendipity shifted her course from that one-dimensional approach to research when big social and economic changes and challenges in the City of Lowell opened a door to Silka that, eventually, would lead down a road to the Mitchell Center. Today, she spends her time connecting disparate people, projects, and disciplines in an effort to craft sustainability solutions.

But we’re getting ahead of ourselves, for Silka’s transformative work continued at UMass Lowell for over 22 years before she settled in at the Mitchell Center in 2014 as a Senior Fellow.

Back in the 1990s, in the wake of collapsed and collapsing industry, Lowell was undergoing a dramatic economic and cultural shift. Says Silka, “Here was this town that was dying, all the industry moved away and all of a sudden the city was attracting people who dressed differently, spoke different languages, had different issues and different life experiences.”

At the time, Lowell became the second largest Cambodian community in the United States as thousands of Cambodian and Laotian rural refugees fled the trauma of the Khmer Rouge.

As the shifting Lowell landscape began to affect UMass Lowell, university leadership encouraged Silka to refocus her research and direct a new center that would work on community development and partnerships. Silka thought the idea sounded interesting and potentially transformative—both personally and for her research, the latter which increasingly seemed to lack societal relevance.

“Research is what I love, but back then I’d write journal articles and even a major book that in the end made no difference whatsoever. People would tell me, ‘This is amazing research and really helps us think differently about social cognition’ but the research itself had no meaningful social impact. So I made the shift.”

Suddenly, Silka was working directly with Lowell police and thinking about how to create a system that could work fairly and effectively with people from different cultures and in a setting with entrenched environmental problems like decades of lead paint contamination and a badly polluted Merrimack River.

The refugees moving to Lowell had a deep family tradition of fishing in the Mekong River for sustenance and they wanted to keep fishing in the Merrimack. But the fish were not safe to eat. The federal Environmental Protection Agency complained that the Cambodians were not paying attention to ‘No Fishing’ postings and said Lowell authorities needed to tell the refugees to stop catching fish for consumption.

“Well, this was a major family activity and we weren’t going to simply tell them not to fish,” Silka says. Instead, she recalls, the situation presented an opportunity to take a different tack and innovate rather than admonish.

Silka and colleagues brought graduate students and community members together to look at the situation from a fresh angle and generate discussion and materials about how important fish were to everyone regardless of culture—whether Cambodian or Portuguese, African, or French Canadian. “It was something we shared and each family had an interesting history around fish they love,” she says.

As part of this cooperative, collaborative approach to the problem, the group put together a menu of different favorite fish recipes to be shared by all but also stressed the need to think about the safety of fish, and then had the EPA caution everyone about the fish and what specific parts were safe to eat.

Silka notes that this example is very much in keeping with the work of the Mitchell Center, which at its core is about “how you bring a diverse group of people together, how you find commonality, and how you move things ahead and find solutions.”

Before Silka made the move to the Mitchell Center in 2014 she had served as director of the Margaret Chase Smith Policy Center at UMaine since 2009. The move from UMass Lowell was a natural fit both professionally, and personally; she and her husband Larry, a UMaine faculty member in the psychology department, own a home in Orono and Silka had commuted down to Massachusetts for a long time indeed. At this same time, the Sustainability Solutions Initiative (SSI), which would eventually evolve into the Senator George J. Mitchell Center for Sustainability Solutions, was getting underway.

“I had taken a sabbatical year at the Smith Policy Center in 2008 and was getting ready to go back to Lowell when the UMaine vice president for research asked if I’d consider staying on to direct the Smith Center and serve as a tenured faculty member. I was delighted to accept the opportunity. What’s more, SSI was getting underway at the time and the prospect of also being involved in that sustainability and interdisciplinary work was very appealing,” Silka says. Appealing, too, she adds with a smile, was the fact that she and her husband “would now get to live in the same place like regular people.”

Her years at UMass Lowell working in community development and building stakeholder partnerships laid the foundation for her SSI/Mitchell Center work, which today runs the gamut from issues in materials management (solid waste) and sustainable food systems. One of her roles is to serve as a facilitator who connects disparate groups working on issues that might not necessarily cross paths but, if they did, may lead to broader, integrated solutions.

For example, in working with the Mitchell Center Materials Management (solid waste) team as well as the Sustainable Food Systems project headed up by the UMaine Honors College, Silka has been able to help build bridges connecting the two projects.

“In materials management meetings there’s a fair amount of talk about the amount of organic waste ending up in the trash and how this is impacting landfill space. And in meetings with the food group we’ve talked about people in Maine not having enough to eat and a host of problems related to the food system in the state,” she says.

Putting two and two together eventually led to discussion with U.S. Congresswoman Chellie Pingree who had raised concerns about local grocery stores throwing away large volumes of food only a day past the date of sale.

“Pingree’s position had importance to both groups and presented a way to start a conversation between them,” Silka says. What’s more, that conversation eventually led to a conference call with Pingree’s staff “to talk about how we could all work together on solutions to some of these issues.”

From urban and local to rural and statewide

Silka notes that while her UMass Lowell work was urban and local in nature and Mitchell Center work is more rural and statewide, there are similarities—not the least of which are economic in nature.

“The two places—that part of Massachusetts and Maine in general—are similar in that they’re both poor,” Silka says. “And, to me, that is one of the most interesting places to work because you can’t just throw resources at problems because the resources simply aren’t there, which is another reason why you have to innovate to come up with viable solutions.”

Silka calls innovation a major focus of her work because as problems and stumbling blocks pop up along the way it’s often necessary to keep reframing things to move forward. And for innovation to happen, she stresses, you need the right mix of people in the room—another inherent strength of the Mitchell Center’s approach to solution making.

“You always need to have people who are both not so similar in how they think about things yet not so different that they can’t find common ground,” Silka says. “There is interesting research in psychology about how people work across disciplines, and the places that seem to work pretty well are at the boundaries of those disciplines. And I think that’s true for innovation as well—you have to be close enough to see there’s some possibility but far enough away that each other’s view seems just a little weird.” Cross fertilization, in other words, can grow new ideas and lead to new solutions given the right conditions.

What’s more, Silka adds, because this boundary work often pushes at the edges of unknown territory there are “so many opportunities to make mistakes and to keep trying different approaches until you succeed. And that’s part of why this is such a rich learning environment.”

Indeed, transforming failure into fertile ground for eventual success is a central tenet of the Mitchell Center’s namesake who, Silka notes, points this out to students when he attends the annual Mitchell Lecture on Sustainability.

“There’s usually some time set aside for Senator Mitchell to meet with students and it has been amazing to watch because he’s so good at talking to them, drawing them out, and asking them to think about how what they’re doing is going to make a difference. A lot of his theme is about mistakes he’s made, and he has a wonderful way of saying to the students, ‘If you try this and you try that and it doesn’t work, the most important thing is to learn from it.’”