The cusk isn’t going to win any piscine beauty contests. It’s no colorful clownfish, sleek tuna, mighty sailfish, or even a silvery sardine.

By the time Jocelyn Runnebaum sees them, cusk are looking decidedly the worse for wear — their stomachs are protruding from their mouths, eyes are bulging out, skin is bubbled, bellies are bloated. All thanks to an express elevator ride from ocean bottom to surface in a lobster trap where they had inadvertently taken refuge. The trauma is caused when the air in their swim bladder expands as the pressure decreases. It’s kind of a fish version of the bends.

Cusk, Brosme brosme, is the only species in its genus. It is one species commonly caught as bycatch, or non-target species, in deeper waters in Maine’s lobster fishery. At the same time, the fish is not common and not that well understood. It is listed as a Species of Concern by the National Marine Fisheries Service, and is under NMFS status review for listing under the Endangered Species Act.

Runnebaum, a fisheries science Ph.D. student at the University of Maine, her adviser Professor Yong Chen, and Assistant Professor Christine Beitl, an anthropologist, are involved in a project partially supported by the Senator George J. Mitchell Center for Sustainability Solutions. The multi-year research project is designed to get a better handle on how the habitat of cusk overlaps with Maine’s venerable lobster fishery and whether cusk mortality can be reduced with the help of lobstermen.

Chen says the numbers of cusk caught in lobster traps are relatively small, but there are so few cusk in the sea that any loss is a concern. Then there is the possibility that future regulations to reduce cusk bycatch could have serious effects on Maine’s $364 million lobster fishery. 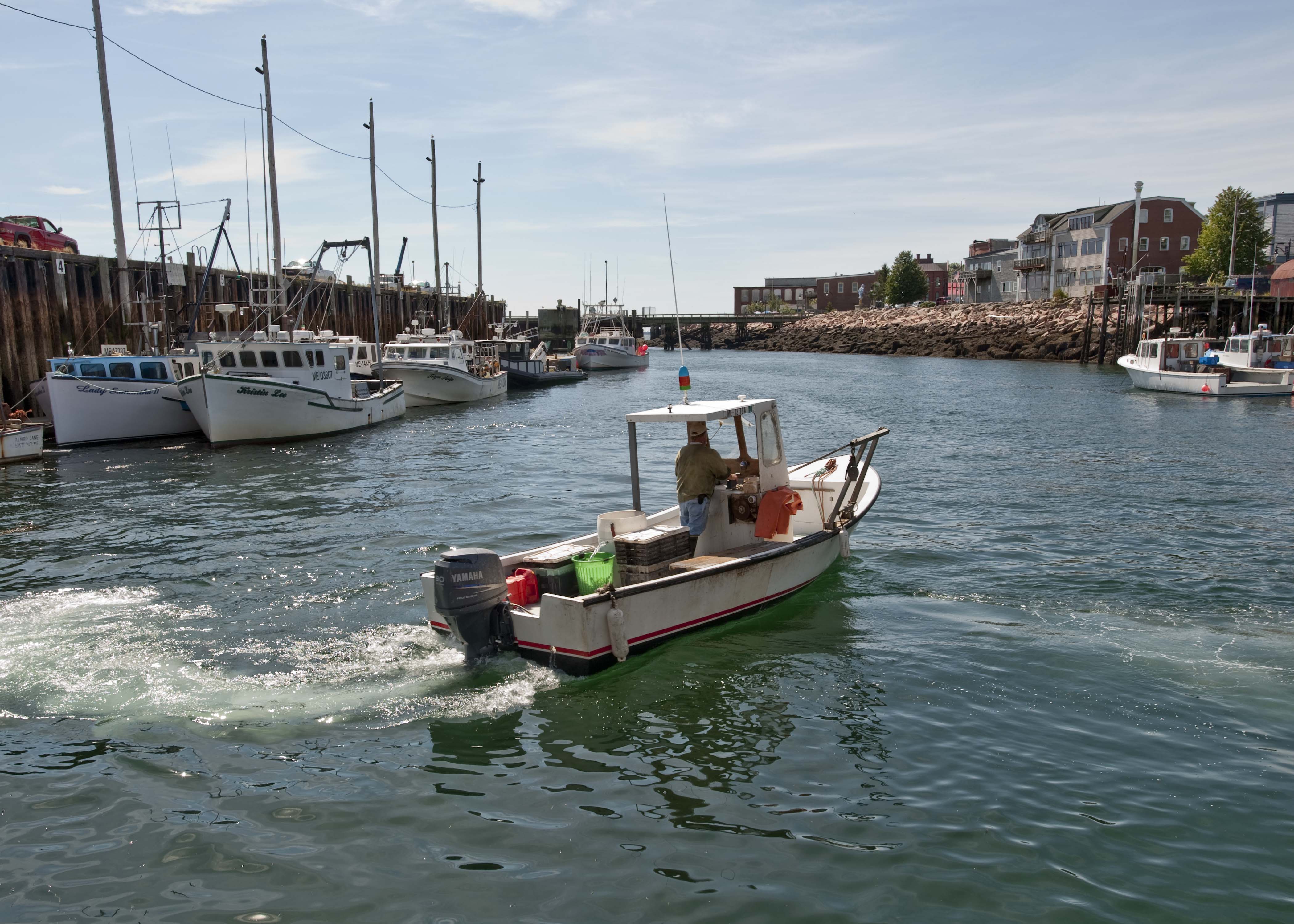 The state’s Department of Marine Resources does monitor bycatch, sending observers out on lobster boats. “But the problem is they don’t go out randomly. They go out with the usual fishermen and only cover certain types of habitat. We know that bycatch will be different for different habitats. If you want to have really reliable estimates you have to do a lot of monitoring work,” said Chen, a fisheries scientist at UMaine’s School of Marine Sciences who specializes in fisheries ecology and management of commercial and recreational fish species.

Since there’s a notable dearth of data about cusk and its populations, the project team say it is important to enlist lobstermen to help fill in the gaps. After all, they are the ones who deal with the bycatch issue. “If we have data we can try to minimize the impact to the industry,” in case there is ever a move to conserve cusk by regulating the lobster fishery, Chen said.

While Chen is looking at the ecological questions, Beitl is studying the human part of the equation. She and Sarah Ebel, a graduate student in anthropology and environmental policy, are interviewing lobstermen and others in the industry. “We needed to gain a better understanding of attitudes, how people think about bycatch, and what kinds of experience they have had with scientists in the past,” Beitl said.

The researchers asked fishermen how serious they think the bycatch issue is, which fisheries and fishing gear are responsible for most of it, and how it affects the lobster industry. They also asked the lobstermen about their past experiences with research projects such as theirs.

One theme that already stands out in an initial analysis of the interviews, they say: the lobstermen don’t always trust scientists. They worry that research findings could come back to haunt them in the future in the form of fishery closures or restrictions. They worry about their industry, but also their livelihoods and their future on the sea. Some who agreed to cooperate in the bycatch project admitted they did so in order to keep an eye on the process.

“Developing partnerships built on trust and mutual respect, is an important, but intensive process that requires a great deal of nurturing and investment” by everyone involved, Beitl said.

Cusk live in moderately deep water off the coasts in the North Atlantic, from south of Cape Cod all the way up to Iceland and Norway. They favor rocky ocean bottoms. The cusk generally runs afoul of Maine lobster traps in spring and fall, when the lobster fishery moves offshore into deeper waters.

That’s when Jocelyn Runnebaum gets calls from the five volunteer lobstermen who have agreed to let her accompany them to sea to view the situation firsthand. Another four are keeping bycatch logs for her as well. She gets up in the wee hours and heads for the docks on the Maine coast. She hauls her research gear and foul weather gear on board, including her research trap. She loves being out on the water. It reminds her of fishing with her grandfather for sailfish and mahi-mahi off the coast of Mexico as a little girl.

“You can smell the ocean. It makes me remember why I wanted to do fisheries research. Then the sun starts to come up. I quite enjoy the mornings on the boat, though there have been days when it’s pretty rough. This year I started to get seasick sometimes. The groundswells in the Gulf of Maine are impressive. That was not fun,” she said.

She spends her downtime on board helping out by filling bait bags and chatting with the crew.

When fish come up in a trap she gets to work, taking photos and logging details about the fish’s length and condition. The first cusk hauled up in a trap goes back into her research trap, which is outfitted with a GoPro camera, and is put back into the ocean. The camera will shoot some three hours of video to assess the ability of the fish to recover from the pressure trauma. The trap will be picked up later in the day on the way back into port.

As a bottom dweller in waters 200 to 800 feet down, the swim bladder of a cusk is not connected to its gut. That means they can’t burp, or quickly expel air. Brought rapidly to the surface, the air in their swim bladder expands as the pressure drops. That distends the organ and it pushes other organs into places they shouldn’t be. It’s sort of the equivalent of a car air bag that expands, but doesn’t deflate, and ends up pushing the occupants and their cargo out the windows.

It’s called barotrauma — baro because it has to do with pressure. The results aren’t pleasant, either for the fish or the person looking at it.

“Their skin gets bubbly with air trapped under it. Their eyes pop out. Their stomach pops out of their mouth. Their abdomen will get distended. There’s internal damage from blood vessels that rupture and air in places it shouldn’t be. Organs get pushed around when the swim bladder inflates. Not all of them go through this. It depends on the depth they’re coming from,” Runnebaum said.

You might think, looking at a barotraumatized fish, that it was a goner. Some are, especially if they’re just tossed back into the sea. It takes a while for the gases in their swim bladder to equalize and by then the vulnerable fish may have become food for other fish or birds, or just succumb to the trauma.

But Runnebaum’s research has shown that promptly re-sinking the cusk in a lobster trap, and returning it to the greater pressures to which it is accustomed, dramatically improves the odds of survival. That didn’t surprise her, she said. Research on Pacific rockfish has shown a similar response. Incidentally, it was a lobsterman attending a 2011 cusk conservation workshop in Portland who suggested recompressing cusk in a lobster trap.

“I have one fantastic video. It’s phenomenal in terms of demonstrating that recompression can actually work,” she said. A photo she took on the boat shows the fish’s stomach protruding from its gills. But in the video shot at depth “the organ is no longer everted. “He’s moving around and he’s looking pretty functional and lucid,” Runnebaum said.

Now Runnebaum’s lobstermen volunteers are engaging in similar experiments, minus the GoPro camera. In addition to recording data about bycatch fish — its condition, how long it is on deck — they put it back in the “kitchen” part of the trap and drop it back to the bottom to be hauled again in a few days. Sometimes the fish is gone — indicating that it recovered and left its temporary refuge. Sometimes it might get hauled — and barotraumatized again — when the lobsterman visits the traps in a week or so. That’s unfortunate for the fish, but an indicator that it recovered from the first trip.

“They’re showing close to an 80 percent survival rate,” Runnebaum said. “We’ve shown that they have the ability to survive. However, they aren’t leaving the traps like we hoped they would.”

Chen, her advisor, is impressed. “They are a pretty tough fish,” he said. “A lot of fishermen were shocked. They thought cusk had no chance to survive.”

For the next phase of her research, Runnebaum has asked lobstermen to think about how to make sure the cusk leaves the trap once it is returned to the bottom for recompression. The best solution would be one that doesn’t involve expensive trap modifications. “I don’t think trap modifications are going to help the cause of the fish,” she said. “I believe there’s a way to get the fish back down to depth that’s simple and can be done quickly.”

“Descending devices,” used on the Pacific coast to recompress rockfish that suffer the same barotrauma symptoms as cusk, are a possibility, said Runnebaum. But they are time consuming. They were developed for recreational fishermen releasing one fish at a time and might not work for commercial lobstermen hauling hundreds of traps a day, she said.

For Runnebaum, her time out on the waters of the Gulf of Maine has taught her a lot about lobstering (including that no two lobstermen seem to do everything the same way) and reminds her why she went into fisheries research in the first place. “As a scientist, I feel that it’s hard to interact with the real world. We spend so much time with theory and modeling. That is important, but it’s really great to be out in the physical environment observing things.”

It’s also a reminder of the holistic nature of the undersea environment and the fact that all organisms, not just high profile species like sea turtles or whales, or the commercially valuable ones such as haddock or lobster, play a part, she said.

“Cusk are not economically important, but they are an organism whose population has declined. We don’t know its ecological value. It has one, but what it is we haven’t figured out,” Runnebaum said. “That’s an indicator that we need to change the conversation from species conservation to ecosystem conservation.”

Runnebaum said the lobstermen she works with are excited about the prospect that they might be able to help keep the cusk from further decline — and, by extension, keep their industry from additional regulations that would affect their livelihoods. “I think we need more fishermen on board with this research,” one told her, echoing Beitl’s words.

Getting more lobstermen involved will be key to broadening the amount of data collected and thus drawing conclusions about what it shows. The ideal end result might be a community-based monitoring program and handling procedures that ensure that the maximum number of fish inadvertently caught in lobster traps survive the experience — and that new regulations aren’t needed, said Chen.

Beitl said that Runnebaum’s preliminary research showing that eight out of 10 cusk survive once they are recompressed “offers the exciting promise that solutions can be conceived” by scientists and fishermen working together in an atmosphere of trust and openness.

Joe Rankin writes on forestry, nature and sustainability from his home in New Sharon.