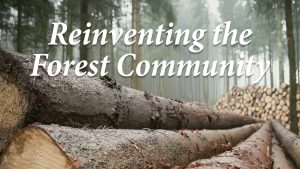 This discussion will explore the relationship Maine’s communities have had with the forest, how it continues to evolve as regional and global economies impact traditional industries, and ways the Northern Forest Center is renewing pride, purpose and vitality of these communities to create continuous opportunity in a new forest future.

Rob Riley joined the Center in 2007 as director of programs, leading development of new programs emerging from the Center’s Sustainable Economy Initiative and assumed leadership of the organization in spring 2008. Rob has helped the Center grow into a well-respected regional innovation and investment partner and has developed recent programs including the impact-investment led Millinocket Housing Initiative and Lancaster Main Street Fund, the Northern Forest Board Forum, and the Rural Development Innovation Group, a partnership with the Aspen Institute and the US Endowment for Forestry and Communities. He is particularly proud of the Center’s team and the organization’s ability to secure gains for Northern Forest people and communities while driving projects in local communities, within each of the Northern Forest states and at the national level.

Prior to joining the Center, Rob served as director of MicroCredit-NH, an award-winning statewide community economic development program. Previously, Rob founded and served as executive director of Main Street Plymouth, Inc., which received New Hampshire’s “Main Street Program of the Year Award” in 2000. His other professional experience is wide-ranging in scope and geography: he’s been director of Youth Programs at Sagebrush Arena in Hailey, Idaho, and a farmer and logger in Andover, Vermont. Rob lives in Canterbury, NH with his wife Tabitha and their two children Alice and William. When he’s not off running or skiing in the woods, he enjoys watching his two kids take to the field in their busy schedules of sporting events. The New Hampshire Union Leader included Rob in its 2003 list of “Forty Outstanding Leaders Under 40 in New Hampshire.”