Drifting with the Tides 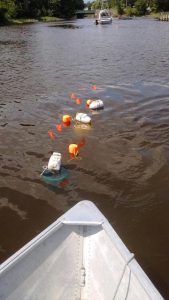 If you happen to be boating on the Medomak River in Waldoboro, Maine, you might encounter a little flotilla of buoys adorned with brightly colored flags drifting in and out with the daily tidal cycle.

These “bucket drifters” are packed with scientific instruments that take the measure of the tides—research aimed at better understanding the dynamics of the estuary’s ability to flush out harmful bacteria that, in the wake of rainstorms of more than an inch, close clam flats for a mandatory nine-day period. In such cases, most of the Medomak is off limits to the 175 licensed shellfish harvesters, which can cause economic hardship for extended periods of time.

Leading the fieldwork is UMaine Master’s student Gabrielle “Gabby” Hillyer, now in her second-year as a dual-degree oceanography and marine policy major. Hillyer arrived at UMaine from Boston University where she studied marine biogeochemistry.

After telling her BU advisor that she wanted a broader spectrum, bigger-picture focus for graduate school she recommended Hillyer talk with assistant professor Damian Brady of the UMaine Darling Marine Center about pursuing oceanography.

Brady, along with Bridie McGreavy, assistant professor in the Department of Communication & Journalism and a Mitchell Center faculty fellow, is a team member on the Medomak River drifter project.

“When I applied to UMaine and Damian’s lab, he said I’d be a really good fit for the Medomak project because of my interdisciplinary science experiences,” recalls Hillyer. “One thing led to another and after meetings with Bridie about potential case study research it seemed like a perfect opportunity to combine qualitative and quantitative studies together in a really unique way.”

McGreavy emphasizes social science, community-based components in her own research on coastal Maine shellfish communities, and Hillyer has been active in various official meetings relative to Waldoboro’s shellfish industry in her Medomak research.

The ultimate goal of the Diana Davis Spencer Partnership is to develop, implement and evaluate solutions to complex problems requiring a careful balance between economic development and environmental preservation. A central element of this solutions strategy is to inspire and equip a new generation of engaged, entrepreneurial citizens by providing students with transformative, hands-on experiences in the power of innovative partnerships to create a brighter future. Hillyer is one of six Diana Davis Spencer Scholars selected to work on the Strengthening Coastal Economies project.

Hillyer, who deployed the drifters all last summer and will continue the process right through the winter months, is working closely with commercial clammer Glen Melvin, who is also chair of the Waldoboro Shellfish Committee and sits on the Maine Shellfish Advisory Council.

“I go out with Glen about every other week to do the drifter work, and I’ve also sat in on meetings with him at the City Council, the Medomak Land Valley Trust, and the Shellfish Commission,” Hillyer says. “He was also my primary contact for a number of the clammers I’ve interviewed.

Before she released any drifters into the Medomak, Hillyer interviewed eight clammers and, based on that, she and Melvin have been exploring specific mudflats that the clammers themselves have identified as areas of interest.

“Basically, I talked with any clammer who offered information about areas they felt needed further exploration in terms of a more in-depth scientific study,” she says. “They identified different clam flats they wanted reopened or those that are very popular, areas they’ve all dug before and have seen deteriorating for one reason or another. So those are the areas I’m primarily exploring, and of course the entire estuary will eventually be mapped.”

Hillyer adds that the drifter work is also seeking to determine if water currents change drastically when there’s a rainstorm—important especially since that’s part and parcel of the bacterial closures.

Hillyer’s work is part of a larger effort to build a high-resolution tidal model of the estuary. To do that, she will use not only the drifter data built up over months of fieldwork but also a wealth of bacteria data gathered by the state’s Department of Marine Resources and Department of Environmental Protection.

“I want this project to support the clamming industry in Waldoboro, which has some of the highest landings values in the state and also some of the most challenging water quality issues,” Hillyer says. She adds, “I’m hoping the project might lead to changes and improvements in the future regarding the bacterial closures they have there.”

Hillyer notes that from her conversations with clammers, she believes they have a much greater knowledge about sustainability problems in their own industry “than I think a lot of people realize,” she says.

She also says that in her experience, the Waldoboro clammers and townspeople interested in the health of the flats welcome the scientific inquiry. 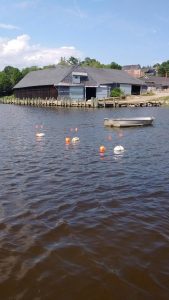 “I think they want more scientists on the project because they believe that with more scientific investigation and a clearer picture of the estuary’s dynamics, they’ll be able to open up these clam flats. We’ll see if that’s true, but I believe the clammers actually want me there.”

It has also helped, Hillyer asserts, that she showed up to do the job and has become a fixture on the Medomak. “I still go down there every other week to talk to them, check on things, and release drifters. I think that’s played a big role as well in terms of their interest and commitment to the project.”

All of which no doubt helped Hillyer recover one of the satellite trackers someone plucked off a bucket drifter.

“When I called the police dispatcher, she actually knew about the drifter project. So, I think the theft and eventual return shows I am not only engaged and supported by the community, but that my project’s publicity had been farther reaching than I expected. The majority of the selectmen, the town manager, Glen Melvin, as well as the game warden all contacted me at various stages during the retrieval of my tracker.”