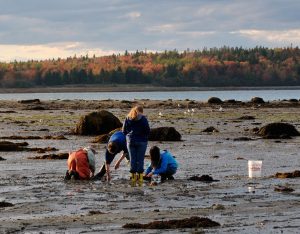 With fecal bacterial contamination and naturally occurring Vibrio pathogens on the rise, there’s a lot working against the economic viability of Maine and New Hampshire’s shellfish flats. And the growing problem raises the specter of serious public health consequences.

In an effort to manage the threat, the states of Maine and New Hampshire close thousands of acres of clam flats every year – a phenomenon that threatens the livelihood of shellfish harvesters and delivers a blow to the states’ economies. Take, for example, the Piscataqua Estuary that forms the border between Maine and New Hampshire. Last year, every shellfish flat on the Maine side of the commonly held body was closed due to bacterial pollution.

A new multi-institutional research project funded by the National Science Foundation to Maine EPSCoR and New Hampshire EPSCoR seeks to both better understand and find solutions to the scourge plaguing these crucial fisheries. Partnering with shellfish harvesters, state and local officials and non-governmental groups, scientists want to both understand how contamination happens and develop more scientifically accurate tests for bacteria. They also want to foster robust communication between researchers and stakeholders. Success of the project is dependent on participation of key project partners, especially state regulators and shellfish harvesters. There’s a lot at stake. Maine and New Hampshire depend heavily on the shellfish economy. In 2010, for example, Maine shellfish landings generated $347 million in revenue.

The main concern is public health. Food-borne illness from seafood is on the rise in the Northeast and the nation as a whole, according to the Centers for Disease Control.

“This is about trying to get science and policy to a grassroots level and run with it,” said Chris Petersen, a project leader and a professor at COA. “With a problem like these closures, most people will say: ‘We need a scientist.’ But we can’t do much without the help of the harvesters. We need their help to make conservation work, and to work together on short and long-term goals.”

Petersen and colleagues are part of the New England Sustainability Consortium (NEST), which has mobilized the collective capacity of universities and colleges to strengthen connections between science and decision-making. Beginning with coastal areas in Maine and New Hampshire, NEST is capitalizing on research and stakeholder synergies to advance the theory and practice of sustainability science. This scientific model seeks solutions to pressing societal problems with a focus on both human wellbeing and protection of the planet’s life support systems. A key component is collaboration with diverse stakeholders, in this case state local government, beach managers, shellfish harvesters and citizen scientists. See more on this story