A major part of the Maine Folklife Center’s mission is the dissemination of the folklore we collect.  We do this through publications, exhibits, and programs and events such as those listed below.

Find out more details below from our poster for the event:

The workshop consists of a panel discussion/performance and audience participation of several ballads collected in Maine.  These include both British Ballads such as “Molly Bawn,” and local ballads such as “The Deer Isle Tragedy.” We discussed ballad collecting in Maine with Pauleena MacDougall (Director of the Maine Folklife Center), literary themes in ballads with Sarah Harlan-Haughey (UMaine English professor and honors preceptor) and how ballads are performed traditionally, and how ballads move and change over time with musicians and folk song collectors Julia Lane and Fred Gosbee (members of Castlebay) and Jeff “Smokey” McKeen, member of the Old Grey Goose performing group (learn more about Smokey here or here).

The audience was invited to bring their favorite ballad or collections of family songs and we heard some great ballads that way, old and new. The program was funded in part with a Community Arts and Humanities grant from the Maine Arts Commission and the Maine Humanities Council, and small grants from the UMaine Humanities Initiative and the University of Maine’s Cultural Affairs Distinguished Lecture Series.  The program was free and open to the public.

Ballad singing and ballad collecting are part of Maine’s cultural heritage. The Maine Folklife Center has an extensive collection of ballads and other folksongs that it wants to bring to the public’s attention. Recently, with support from the National Endowment for the Arts, the Center created a Maine Song and Story Sampler on our website with accompanying curriculum for teachers.  In addition, the center published the second volume of British Ballads from Maine in 2012.  Maine has an active community of folk musicians and those who enjoy folk music.  The program fulfills the Maine Folklife Center’s mission to engage communities in the vernacular arts and culture of Maine and the Maritime Provinces.

The Maine Folklife Center conducted research and public programming with the annual American Folk Festival on the Bangor Waterfront.  Specifically, the center produced the Folk and Traditional Arts area of the festival. 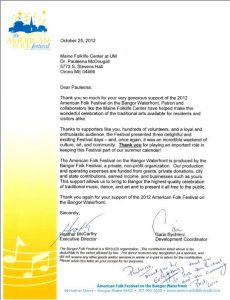 Here’s a letter from the Executive Director (Heather McCarthy) and Development Coordinator (Carin Sychterz) thanking the Maine Folklife Center for their support including a personal message to Pauleena from Carin: “Thank you for everything that you do for the festival and the community.”

Check out the website of the American Folk Festival to learn more.