James S. (Jake) Ward IV is the Vice President for Innovation and Economic Development. His office supports economic development by acting as a liaison for business and industry, facilitating technology transfer, and handling patenting, licensing and commercialization activities for the University of Maine. The office also supports federal and state government relations for the university’s R&D mission. Vice President Ward  has served UMaine in various roles within the Department of Industrial Cooperation and the Center for Innovation and Entrepreneurship since joining the University in 1990.

Prior to joining the University of Maine, Vice President Ward worked in private industry in software development and manufacturing.  He also serves on the boards of  state/industry organizations including the Maine Technology Institute, FOR/Maine,  and SEA/Maine. Originally from Saco, he holds a B.S. in mechanical engineering and an M.S. in ocean engineering from the University of New Hampshire. 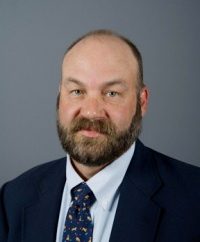