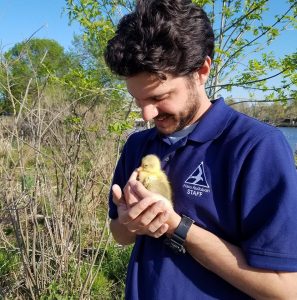 Paul Kelley graduated from the University of Maine’s EES program in 2013. Since then he has received his  Master’s degree in Environmental Education at Southern Oregon University and started working for the Massachusetts Audubon as an Education Coordinator at Habitat Sanctuary in Belmont, MA.

During his time at the University, Paul enjoyed many different academic courses, and became involved in various extracurricular clubs, activities and jobs that helped him develop the skills he uses in his current job. He appreciates that the EES program allowed him to take the courses that he was passionate about and that the curriculum helped him develop a broad knowledge of ecosystems and environments.

Paul was a member of the track and field team and served as a 400 meter hurdler. He states that, “running track helped me develop the drive and confidence to succeed as an urban environmental educator.” His teammates became his best friends and they continue to stay in touch.

During his undergraduate summers, Paul worked at the 4-H Camp & Learning Center at Tanglewood, which he discovered through the EES Job Fair at the University of Maine. This particular program provides a nature-based camping program for children of ages of 8-14 year olds, day camps for 4-11 year olds, and leadership programs for teens 14-17 years old. Tanglewood was where Paul developed a love of education, and combined with his love for the outdoors, led him to his career in environmental education.

Currently, Paul serves as the Outreach Education Coordinator at the Massachusetts Audubon’s Habitat Sanctuary in Belmont, MA. This entails creating environmental education programs ranging from preschool to assisted living facilities in and around the Belmont, Cambridge and other surrounding cities and towns. He thoroughly enjoys his job, which allows him to take the natural history he learned at the University of Maine and create programs that connect the public to the nature in their own backyard.