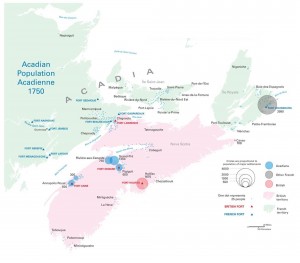 The year 2005 marked the 250th anniversary of the beginning of the deportation of the Acadians from Nova Scotia and adjacent areas to points around the Atlantic rim.  A defining moment in the history of the Acadian people, the deportation also changed irrevocably the human geography of what is today Canada’s Maritime Provinces.

Although De Monts established a trading post at Port-Royal in 1605, the French hold over Acadia was fragile and intermittent until 1632 when the Treaty of St. Germain-en-Laye confirmed French possession of the region.  During the early 1630s, almost three hundred French immigrants arrived in the Port-Royal area.  With a high birth rate and low infant mortality, the population reached approximately 500 people in 1671, 1,400 in 1707, and about 13,000 people in the early 1750s.

From the initial core at Port-Royal, Acadian settlement spread around the Bay of Fundy as well as onto Île Saint-Jean (Prince Edward Island) and to Pentagoet at the mouth of the Penobscot River.  The population depended on mixed farming, raising livestock and crops from dyked marshes.  At the Treaty of Utrecht in 1713, much of the area settled by the Acadians was transferred to the British who called the territory Nova Scotia. 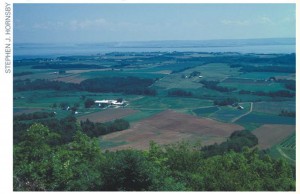 A view over Grand-Pré and Minas Basin.  in Fall 1755, more than 2,000 Acadians were deported from this area. 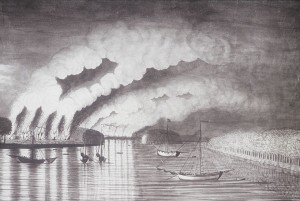 “View of the Plundering and Burning of the City of Grimross” by Thomas Davies, 1758.  Davies’s eyewitness view shows British troops destroying the Acadian settlement at Grymnross, present-day Gagetown, fifty miles up the Saint John River.

During the early eighteenth century, the French and the British consolidated their respective positions in Acadia and Nova Scotia.  The French built a massive fortress town at Louisbourg on Île Royale (Cape Breton Island), and placed forts to command the Chignecto Isthmus and the Saint John River. Meanwhile, the British strengthened Port-Royal, renaming it Annapolis Royal, and then, in 1749, constructed a fortified town at Halifax; they also built Fort Edward overlooking the Avon River and Fort Lawrence at Chignecto.

Increasing friction between the British and the French in the Ohio Country led to the outbreak of the French and Indian War (Seven Years War) in 1754. The following year, British and American colonial forces captured Fort Beauséjour, giving them control of the Chignecto area. Concerned at the large Acadian presence in the hinterland of Halifax and aware that many Acadians had refused to swear loyalty to the British crown, the military governor of Nova Scotia took the fateful decision to clear the Acadians from their settlements. 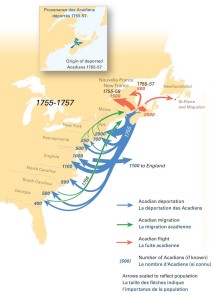 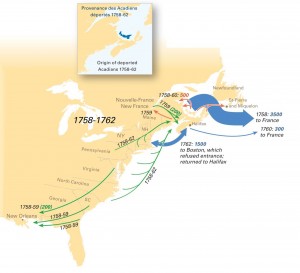 The deportation of the Acadians began in the fall of 1755 and lasted until 1778. The first removals, comprising approximately 7000 people, were from settlements around the Bay of Fundy.

After the British captured Île Royale and Île Saint-Jean and raided the Gaspé and the Saint John River in 1758, further Acadians were captured and deported. Those who had sought refuge in Saint-Pierre and Miquelon were also removed. Farms and businesses were destroyed. A British officer arriving at Annapolis Royal in October 1757 observed “ruined habitations, and extensive orchards well planted with apple and pear trees, bending under their weight of fruit.” 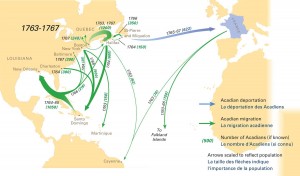 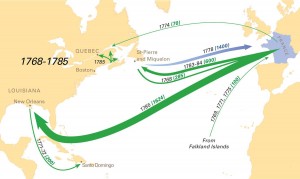 Acadians were shipped to many points around the Atlantic.  Large numbers were deported to the continental colonies, others to France.  Some managed to escape to New France (Quebec).  A handful arrived in the Upper Saint John Valley.  Many moved several times; a great number left the American colonies at the end of the war and returned to Nova Scotia; many of those in France moved to the French Caribbean or  to Louisiana, where they formed the basis of the Cajun population. 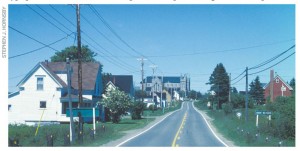 A view of the Roman Catholic church and associated religious and educational buildings at Cheticamp, Cape Breton Island.  Built in the 1890s to the designs of a Quebec architect, the church at Cheticamp serves as a symbol of the Acadian cultural revival in the late nineteenth century.

Those Acadians who returned to Nova Scotia in the 1780s and 1790s found their former settlements occupied by American settlers and Loyalists.  As a result, the Acadians occupied new areas in western Nova Scotia, Cape Breton Island, Prince Edward Island, the eastern shore of New Brunswick, and the Gaspé Peninsula.  In these areas, they drew a living from farming, inshore fishing, lumbering, and shipbuilding. 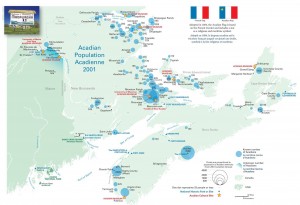 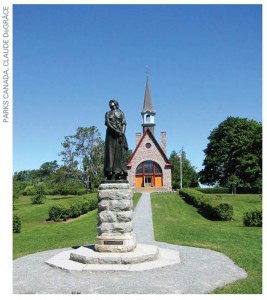 The National Historic Park at Grand-Pré commemorates the Acadian deportation.  The statue represents the maid Evangeline, the heroine of Henry Wadsworth Longfellow’s famous poem about the deportation published in 1847.

Sources:
Acadian population taken from the 2001 Canadian Census.  Figures and distribution represented Statistics Canada’s weighted aggregate of those people who entered Acadian as one of their ethnic identities o census from2B.

Produced by the Canadian-American Center’s Cartography Laboratory with support from the U.S. Department of Education’s Title VI National Resource Center Program and from the Canadian Embassy.  Second Edition printing May 2005.