“A History of Canadian Studies at the University of Maine”

Why study Canada in Maine? First of all, a cursory look at a map of northeastern North America shows that the Pine Tree State is wedged between the Canadian provinces of Quebec and New Brunswick and lies across the Bay of Fundy from Nova Scotia.   Secondly, few maps reveal that this international border region has also been the site of human interaction for thousands of years.   Archaeologists have found ancient cultural connections in what they call the Maritime Peninsula. historians have limned growing interactions over the past four hundred years, and economists are tracing the ever-expanding trade connections that make Canada the most important business partner for Mainers today. Rarely can one pick up a Maine newspaper without a significant new cross-border interaction between Canada and Maine. 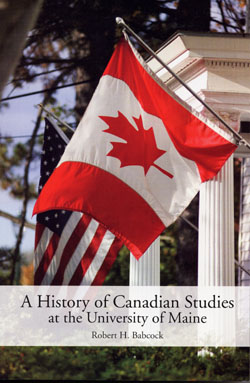 The purpose of this book is to explain the development of the Canadian Studies program at the University of Maine from its origins in the early 20th century to its position today as the most comprehensive program of its kind in the United States. Readers will learn how Maine’s close proximity to Canada has spawned an ever-widening range of cross-border academic contacts rooted in mutual interests that are reinforced by collaborative academic study, which is benefiting residents on both sides of the international boundary.