The Department of Molecular & Biomedical Sciences (MBMS) at the University of Maine provides undergraduate and graduate degrees in Biochemistry, Microbiology, and Molecular and Cellular Biology. Each field offers excellent opportunity in challenging and exciting careers.

Dr. Julie Gosse’s laboratory and outstanding research is featured in the UMaine News, Dec. 30, 2020.  To read the article describing her research to determine potential health risks of a commonly used antibacterial compound. triclosan, use this link: UMaine News.

UMaine Today is currently running a feature entitled; “Learning through Discovery”.  Within the feature is a component highlighting research being performed by our very own Dr. Ben King in collaboration with Dr.Clarissa Henry of SBE.  Their topic is “Molecular mechanisms of muscular dystrophy”.  Check it out here:

In the fall of 2011, the department joined a large group of universities in teaching a yearlong course that is sponsored by the Howard Hughes Medical Institute (HHMI). The course is part of an HHMI, nationwide program called the Science Education Alliance Phage Hunters Advancing Genomics and Evolutionary Science (SEA-PHAGES). The course has become extremely popular with our undergraduates and as of fall 2015, we now offer two section of this laboratory course so that all of our first-year students are enrolled. The course was featured in UMaine Today (see page 40).

The MBMS faculty are very active in a variety of research fields, many in the basic Biomedical Sciences.  You can find brief descriptions of their research programs by going to this Faculty page.   Click here to see UMaine Today articles on MBMS faculty and their research.

A year after his passing, the Department of Molecular & Biomedical Sciences would like to honor former Professor Robert Roxby with a collection of comments from faculty and former students, friends and his family.  This photo was taken by Bob Bayer on the wharf on Frenchboro. 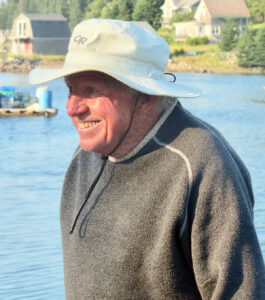 The highest praise—and the highest grade—a student could receive in a biochemistry course taught by Dr. Robert Roxby was the straightforward, “Not at all bad.” From there, his reactions moved from “Not bad,” to “Not good,” and, simply, “Bad.” In Roxby’s mind, grades bordered on silly and worrying about grades was completely pointless. However, knowing that his students expected a response on their work and that the administration demanded it, Roxby crafted his own system of evaluating progress. The point, of course, was to do the work, according to Roxby’s daughter, Caitlin.

One of those students is Dana Davis, now an associate professor in the Department of Microbiology and Immunology with joint appointments at the University of Minnesota and the Medical School of Minnesota. Davis was a late admit to UMaine in the summer of 1987. When he visited campus, Roxby gave Davis a tour of Hitchner Hall, talking at considerable length about molecular biology, biochemistry, and the courses Davis would take as a first-year biochemistry student.

In Dana’s sophomore year, Roxby’s wife, Susan, asked Davis if he would like a job washing dishes for the biochemistry labs. As grateful as he was to Susan for the job and for being recruited, Davis was thrilled when Roxby asked whether he would be interested in doing research. Just back from a sabbatical in Cologne, Germany, Roxby was eager to try new techniques he had learned in Europe for isolating DNA molecules from E. coli bacteria.

Davis had no lab experience and had not taken all the fundamental courses; however, Roxby always treated Davis with the utmost respect, more like a colleague, while providing invaluable on-the-job training. Davis credits Roxby for infusing him with great enthusiasm for basic biomedical research, helping him understand the front-end of the biomedical pipeline, and inspiring him to work closely with students—especially those who did not have a sterling grade point average or arrive with financial or experiential advantages. These lessons inform the work Davis now does every day, and he attributes his professional success to Roxby’s mentorship.

Those who knew Roxby also know that he introduced ping pong to Hitchner Hall by donating the family table for students and faculty to use during a break or while waiting for a process in the lab. Roxby’s game reportedly improved dramatically after the table was moved to Hitchner, though he was seldom able to beat the more competitive students. Ping pong became an integral part of the Hitchner Hall experience. The table never returned to the Roxby home in Old Town and still resides on the third floor today.

During Roxby’s tenure on the faculty, he served as chair of the Department of Biochemistry and was instrumental in bringing the department into the modern era. Roxby had worked at the Temple University Medical School early in his career. When he joined the faculty at UMaine, he brought that expertise with him, updating the biochemistry curriculum upon his arrival. His positive influence in the merger of the Biochemistry and Microbiology Departments in 1989 laid the groundwork for the today’s Department of Molecular and Biomedical Sciences.

Roxby’s older daughter, Meghan, recounts her father bicycling to and from campus as many days a year as possible. She worked at Witter Farm, and often rode her bike to Orono alongside her father. While on sabbatical, once in Holland and once in Germany, Roxby encouraged his daughters to immerse themselves in the native language at the schools they attended. Roxby and Susan were fully confident that their daughters would find their way in a different school system, learning a great deal in the process. Meghan and Caitlin attest that the approach has served them well throughout their lives.

One of Roxby’s faculty friends, Bob Bayer, recounts terrifying rides on Rocket Science—Roxby’s rigid, inflatable power boat. He used the vessel for weekend and seasonal commutes to the family home on Frenchboro, a small, remote island off the coast of Mt. Desert Island. Roxby’s friend Bill Congleton had nicknamed Roxby “Rocket” years earlier. The boat was aptly dubbed Rocket Science in honor of the nickname and the boat’s speed. Roxby was a quiet and unassuming man, but not behind the wheel of that boat.

Bayer also fondly recalls what came to be known as the frozen-pipe festival one winter on Frenchboro. The Roxbys had invited the Bayer, Campbell, and Congleton families to spend a winter weekend at their island home, only to discover a frozen pipe upon their arrival. As soon as they thawed and fixed one pipe, another would erupt, sending them all chasing the next split pipe.

After retiring from UMaine, Roxby moved to Frenchboro full time where he quickly integrated into the community, offering rides on Rocket Science to various islanders in need of transportation, volunteering at the library, and serving on town committees, including as town representative to the local disposal district.

Those who knew Roxby agree that he was brilliant, understated, incredibly curious and well-read, and possessed a wry sense of humor. He knew books; he knew movies; he shared recipes widely.

What fewer people know about Roxby was his quiet, philanthropic commitment to UMaine. Beginning in the mid-1980s, Roxby generously supported the Biochemistry Department, the Fogler Library, the Susan Elliott Judd Roxby Scholarship in memory of his first wife, the Lobster Institute, and the Campus Beautification Fund.

In the fall of 2019, shortly before he died, Roxby made the single largest donation to the undergraduate lab renovation project in Hitchner Hall. Roxby’s donation put the fundraising goal over the top, ensuring the establishment of undergraduate teaching labs for students enrolled in the Department of Molecular and Biomedical Sciences’ programs.

After his death, Roxby’s wife, Beverly, donated Rocket Science to the School of Marine Sciences for oceanographic research. Neal Pettigrew, one of the marine science faculty who uses the vessel, plans to rename the boat the RV Roxby.

Although he seldom called attention to himself, Roxby’s impact on his students, the department, and UMaine remains indelible.

[A special thanks to Liz Erickson of the University of Maine Foundation for all her work in putting together this collection of memories.] 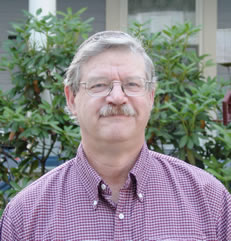 John Singer, who was chair of the then Department of Biochemistry, Microbiology and Molecular Biology (currently the Department Molecular & Biomedical Sciences) from 1998–2006, advanced the development of vaccines to protect salmonids from the most pervasive killer of oceanic and estuarine inhabitants — the bacterial disease vibriosis — and other infectious agents. His research also worked to characterize the toxicological effects of condensates from wood kiln drying on life forms from bacteria to eukaryotic cells to mammals.

John taught advanced courses in microbiology, bacterial physiology and genetics.  He mentored 14 graduate and 44 undergraduate students in his lab during his career. In addition to his impact as an educator and a scientist,  John will be remembered for the warmth and humor he shared with his students and colleagues.

Donations in his memory may be made to the Molecular and Biomedical Sciences Faculty Scholarship Fund, care of the University of Maine Foundation, online at our.umaine.edu/singer. An obituary was published by the Bangor Daily News.