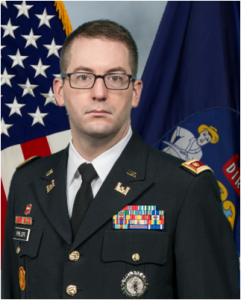 MAJ Nicolas A. Phillips graduated in 2006 from the University of Maine at Orono, where he earned a Bachelor of Science in Environmental Management and Policy. While at Orono he enrolled into the Army ROTC program, and was commissioned as an Engineer Officer in the Maine Army National Guard in the grade of second lieutenant.

Phillips enlisted in the Maine Army National Guard in 2004 as a cadet in the 1136th Transportation Company. Upon commission he was assigned as a platoon leader in the Forward Support Company, 133rd Engineer Battalion. Two years later he was transferred to the 136th Engineer Company (Vertical) where he served as a platoon leader for a year before being assigned to the 1136th Transportation Company where he deployed to Afghanistan in 2011 in support of Operation Enduring Freedom. After returning he took a position as the Company Construction Officer of the 262nd Engineer Company (Horizontal) until 2012 when he was promoted to Captain and became the 133rd Engineer Battalion Construction Officer. Throughout this period he served on various orders working as an Officer Recruiter, Officer Strength Manager, and Recruiting and Retention Battalion Executive Officer.

In 2012, Phillips transitioned to Active Guard and Reserve (AGR) status and was assigned to the 521st Troop Command, where he briefly served as the Operations and Training Officer, before being moved to the 133rd Engineer Battalion as the Assistant S-3 and Plans Officer, where he deployed to Afghanistan in support of the CENTCOM Materiel Recovery Element (CMRE) mission. In 2014, he returned from deployment and became the Brigade Training Officer for the 120th Regional Support Group. Concurrently he was selected and took command of the 185th Engineer Support Company, Caribou, ME. Post command, he was selected and deployed to Montenegro for a two year joint tour as the Bilateral Affairs Officer and Deputy for EUCOM’s Office of Defense Cooperation. In July 2018, he returned to Maine where he was promoted to Major and was assigned as the Maine & Montenegro State Partnership Program Director. In May of 2019, he returned to the University of Maine where he serves as an Assistant Professor of Military Science at the Reserve Officer Training Corps teaching third year Cadets, as well as the Program’s Executive Officer.

He is married to Jenny Phillips, PhD and they live in Carmel, ME with their dog Annie.