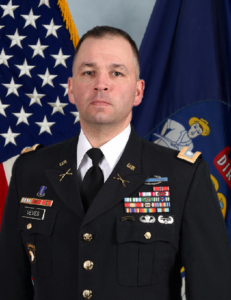 LTC Steven A. Veves graduated in 2002 from Norwich University, where he earned a Bachelor’s Degree in Criminal Justice. While at Norwich he enrolled in the Army ROTC Program, and was commissioned as an Infantry Officer in the Active Army.

Upon return from OSS LTC Veves reported to Fort Irwin, CA serving as a Battalion Staff Senior Trainer (OC/T) for Panther Team and the Brigade S3 Senior Trainer (OC/T) for Bronco Team. After 18 rotations LTC Veves reported to Futures and Concepts Center, Army Futures Command, Fort Eustis, VA where he served as the Executive Officer for both the Director and Deputy Director. He currently serves as the Professor of Military Science for the University of Maine, Orono.

His awards include the Bronze Star Medal (1OLC), the Defense Meritorious Medal, the Meritorious Service Medal (1SLC), the Joint Service Commendation Medal, the Army Commendation Medal (2OLC), the Iraqi Campaign Medal (4 Campaign Stars), the Combat Infantryman Badge, and the Expert Infantryman Badge. He is a graduated of the United States Army Ranger School, Airborne School and Air Assault School. He currently holds a Bachelors in Criminal Justice from Norwich University and Masters in Diplomacy from Norwich University.

He is married to the former Jessie Falconi and have two children. They currently reside in Hampden, ME.