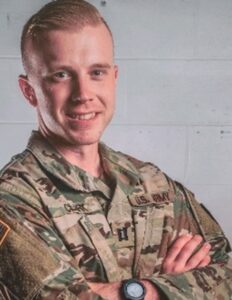 Captain Garrett Clark began his military career as a cadet enrolled in at Westminster College, Salt Lake City, Utah, in the fall of 2009.  He transferred to Husson University in Bangor, Maine in 2010, and graduated Summa Cum Laude with a degree in Criminal Justice in 2013. He commissioned through the University of Maine Army ROTC program as a Second Lieutenant into the Military Police Corps with the Utah National Guard in 2013. Not too long after graduation, 2LT Clark attended Military Police Officer Basic Course in Fort Leonard, Missouri where he graduated as a Distinguished Graduate in September 2014. He has worked as a Police Officer in Lewiston, Maine since 2015.

CPT Clark’s previous military assignments include Platoon Leader for the 488th Military Police Company, Plans Officer for the 286th Combat Sustainment Support Battalion, and Assistant Provost Marshal for the State of Maine.  In 2019, he deployed to Poland in support of Operation Atlantic Resolve, where he served as the S3 for the 286 th CSSB.  CPT Clark also served as the N95 fit test team OIC during the 2020 Maine COVID response. In May of 2020, he took Command of the 488 th MP CO.  Since becoming Commander, the 488th MP CO has been activated for state active duty in support of local and state law enforcement and deployed to Washington D.C. from January 2021 to March 2021 in support of Operation Capitol Response II.  In October of 2020, the 488th MP CO was sent to the South West Border in support of Customs and Border Patrol operations for a yearlong deployment, where CPT Clark currently commands.