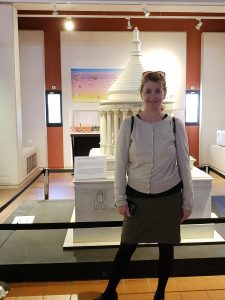 Mary Okin received a doctorate in Canadian History with a concentration in Women’s Studies in 2008.   In her doctoral dissertation, she explored the social construction of mental disorder in Quebec women during the late nineteenth and early twentieth century.  Since 2008, she has been teaching as an Adjunct Faculty for the Women’s, Gender and Sexuality Studies, Franco-American Studies, History, and Sociology departments at the University of Maine.  She has developed and taught courses on the French exploration and settlement of Maine, on the founding and evolution of the Acadian colony, on gender and the history of psychiatry and on masculinity/ masculinities in society.  Mary also has a Masters degree in the counseling field and is a licensed clinical professional counselor (LCPC) and has ten years experience working in the mental health field.  Her research interests include French Canada, the history of the French in Maine, women’s history, the history of psychiatry, and gender construction in society.

”The History of Acadia.” Talk presented for the Maine Humanities Council Borderlands Institute held in Orono, Maine on July 23, 2014.

‘‘Madness in Quebec Women, 1890-1940: An Analysis of Women’s Ambivalence Toward Culturally Prescribed Roles,” presented at the Women in the Curriculum and Women’s Studies lunch series as the kickoff to Women’s History Celebration, March 2008.

“The Diagnosis of Mental Disorder in Women in Quebec, 1912-1940: An Analysis of Women’s Ambivalent Relationship to Culturally Prescribed Sexual Roles as Demonstrated through Expressions of ‘Madness,’” presented at the American Council for Québec Studies conference in Cambridge, Massachusetts, Oct. 2006.

“A Quieter Revolution: A Methodological and Theoretical Rereading of Quebec’s Quiet Revolution Taking into Account the Political and Social Progress of Women and the Emergence of the Female Voice in Literature,”  presented at the American Council for Quebec Studies Conference, Quebec City, November 2004.

“The Baron de Castin; a Historiographical Study of the Historical and Legendary Figure,” presented at the Alice Stewart lecture series, University of Maine, Orono, spring 2003.