Duwage Charitha Perera is a doctoral candidate in the Department of Chemistry. Her key research interest is to study the catalytic behavior of small metal clusters using density functional theory or DFT. She is originally from Sri Lanka.

Perera explains, “I use the theory called density functional theory, which is quite a popular theory among not only theoretical chemists, but also among experimental chemists because our findings can help the experimentalists to compare their results.”

Perera moved to Maine before the research was complete.

She then met with her advisor, Jayendran Rasaiah, to discuss how to continue this research. He encouraged her to finish the project.

Jayendran Rasaiah is a Professor of Chemistry at the University of Maine. “The current study is theoretical and the objective is to work out the optimal conditions under which the experiments can be carried out,” says Rasaiah. By analyzing a reaction using computational methods, researchers can help guide the selection of a catalyst from a set of similar candidates. This avoids the need for lengthy experimental trials.

Acetic acid is a weak acid and an important starting material for the production of vinyl acetate and acetic anhydride for the synthesis of long-chain carboxylic acids and many other organic compounds. It is also considered as a model acid present in unprocessed bio-oil. 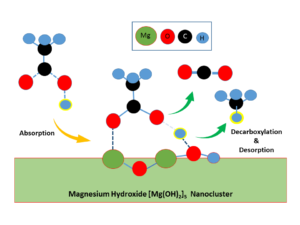 These results suggest that the decarboxylation of propionic acid (which is a component in sweat) will also occur via a similar pathway with the same catalyst.
This catalyst could provide a promising pathway that suppresses undesirable by-products to produce high-quality vinyl acetate and bio-oil, and suggests the potential of magnesium hydroxide catalyst as a coating agent for textiles that decomposes sweat.

Perera says, “If the textile industry were to look for odor-eliminating components they would produce odor-eliminating clothes by coating with some catalyst. So they can use this magnesium hydroxide nanocluster as a coating material to eliminate odor, as a suitable option.”

Her graduate research is equally noteworthy. Rasaiah explains, “Perera is a computational chemist and uses computers to study chemical reactions and design catalysts that can increase their speed. She is working on other problems using similar techniques e.g. the use of catalysts to split water to form hydrogen and oxygen in the presence and absence of light.”

She hopes her findings will lead to a new and more efficient route to decompose acetic acid and similar components, resulting in an improvement in the treatment of organic waste and wastewater and perhaps many other applications.