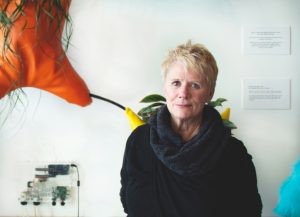 Dr. Susan L. Smith assumed the duties of director of the MA and MFA programs in intermedia effective September 1, 2020. Susan takes over leadership of the program from Dr. Owen Smith, the founding director of the intermedia program, which began admitting graduate students in 2008.

She will report to Associate Vice President for Graduate Studies Scott Delcourt, and assumes leadership of a vibrant and growing graduate program that is housed in the Innovative Media, Research & Commercialization Center (IMRC), giving intermedia students access to state of the art design, fabrication and audio-visual equipment.

The contributions by Dr. Owen Smith in his role as the founding Director of Intermedia MFA and MA programs are also recognized. In this capacity he led the programs and over the years contributed greatly to their development and growth. His efforts, including care and concern for students, are appreciated.

The IMRC building was complete in February of 2013 with funding by a MTI competitive grant of $3.69 million.