Jonathan Bomar joined the University of Maine Graduate School of Biomedical Sciences and Engineering (GSBSE) in the fall of 2014 after earning undergraduate degrees in geological sciences and psychology at Michigan State University.

From Geological Sciences to Psychology to Biomedical Engineering – it’s safe to say Bomar’s curiosity is vast and diverse.

His curiosity led to his current research project, which examines how stem cells become heart muscle. The goal of his dissertation is to be able to engineer therapeutic heart tissue in a lab.

He envisions his research leading to “stem cell ‘Band-Aids’” — or patches of stem cells grown in Petri dishes that could replace damaged heart cells. The healthy cells, he says, would incorporate their way into the heart and begin to contract.

Damaged heart tissue cannot regenerate – leaving people with significant health risks from complications, including infection and heart attacks. This can lead to a decreased quality of life, increased medications and sometimes surgery.

“Current therapeutic options are lacking,” says Bomar. “But the future is interesting.”

Bomar conducts his research in the Laboratory for Surface Science & Technology (LASST) – which recently announced its evolution from LASST to FIRST (Frontier Institute for Research in Sensor Technologies). He wants more students to become aware of the exciting opportunities and resources for biomedical engineering research at UMaine.

“Many people don’t know that FIRST has biological research happening here,” says Bomar. “It is a highly collaborative facility and you don’t have to be in engineering to work here. You could be a chemist or biologist and use the same equipment to produce new technology. I think the change from LASST to FIRST represents a recognition of the long history of research into sensor technologies at the University of Maine.”

Bomar says his faculty advisers, Scott Collins and Rosemary Smith, have supported his research and encouraged him to follow his dreams.

Smith says Bomar’s passion and generosity are inspiring to students.

“Jon does an amazing job assisting the newcomers to our research lab,” she says. “His breadth of technical skills and knowledge, including cell culture, microscopy and microfabrication, makes him a particularly valuable resource, especially to the undergraduates.  Fortunately for them, and their faculty advisers, Jon is also incredibly patient and always happy to lend a hand.”

Bomar, president of the Graduate Student Government (GSG), is active outside of the lab.

“GSG work is really rewarding and a great opportunity to meet people,” says Bomar, who aspires to utilize his skills and knowledge in a career in science policy.

He’s sure to put his heart into whatever opportunities come his way.

You can learn more about Jon’s research by listening to this podcast produced by UMaine GSBSE.

Learn more about student projects like this and chat with researchers directly about their work at the 2019 UMaine Student Symposium (#UMSS19) on April 10 at the Cross Insurance Center in Bangor. 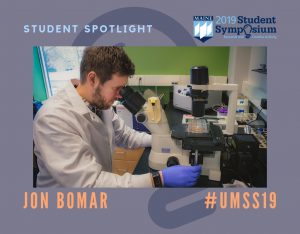