Follow ME: UMaine Researchers Connect With Classrooms Through Field Research

When University of Maine graduate student Charles Rodda was packing for his research trip to Peru in early 2015, there was only one thing that wouldn’t fit into his suitcase: a classroom full of kids.

At the time, he was working with UMaine Cooperative Extension’s 4-H staff to develop educational activities centered around basic STEM principles. The trip, part of Rodda’s graduate research, was in many ways a perfect articulation of the ideas he’d been trying to fit into his lessons. The trip required careful planning, the development of thoughtful research questions, and problem-solving skills.

He mentioned this to 4-H Science Professional, Laura Wilson, and Greg Kranich, then a fellow graduate student, as he prepared for his departure. If students could experience a scientific expedition through the eyes of a UMaine student, their understanding of what it meant to be a scientist would fundamentally change and classroom lessons could become opportunities for dynamic inquiry and adventure.

Wilson and Kranich quickly agreed. They began meeting regularly with Rodda to determine the ways in which they could support his wish to have students follow his research and manage the challenges that the idea posed. “We sat down and asked what we could do to make some sort of connection for [Maine] kids and the research,” Wilson recalls.

Beyond the sheer distance Rodda was traveling, the expedition posed practical communication constraints as well. The research would take place in the Peruvian Andes and the team would be stationed in remote locations with limited connectivity. Rodda had agreed to send dispatches to students in Maine classrooms but the logistical challenge of how exactly that communication could occur remained.

“Finally, we found this product, this satellite communication device, that allowed somebody to communicate from anywhere on the planet,” Wilson explains. “And, it communicated in 140 characters at a time, which, of course, immediately made us think of Twitter.”

With that discovery, the Cooperative Extension’s Follow a Researcher® (FAR) program was born.

Armed with the new device, Rodda would communicate with students via weekly Twitter sessions. During each session, students would be able to ask questions directly of the researchers, a novel opportunity for Maine classrooms, and have them respond in real time.

Despite their enthusiasm, the team recognized that local buy-in was critical to the program’s success. “[Kranich] said, ‘if we want classrooms to come on board, we need to structure this in a way that teachers can really utilize it in their classrooms,’” Wilson explains. “So, we looked at the Next  Generation Science Standards and developed a plan to communicate Charles’ story within the scope of those practices.”

In addition to the Q&A Twitter sessions, the program would feature standards-based videos that classrooms could watch before each session. That way, students in Maine could see what the expedition looked like from Rodda’s point of view and develop an understanding of key research concepts before they engaged with the research team via Twitter.

Soon, Wilson began contacting local schools to tell them about the program and invite them to follow along with the expedition as it unfolded. News of the program spread quickly and within a few weeks of his arrival in Peru, local students began following Rodda and his team as they conducted their work on the glaciers.

Each week, for six weeks, students were encouraged to ask questions about Rodda’s research, experiences on the glacier, and the day to day realities of fieldwork. “Charles would get questions about his research,” Wilson says. “But they would also ask him questions like, what are you eating? Have you seen any animals? And, how do you go to the bathroom on a glacier? The things kids wonder about!”

During that first season, forty schools in Maine signed up for the program. Many teachers built the experience into their curriculum and most participated in the Twitter sessions regularly. In addition to providing local students with unique access to research, Wilson hopes that the program fosters a new sense of what it means to be a scientist.

“Part of the magic is that [the researchers] really aren’t that much older than some of the students, especially the middle school and high school students,” Wilson explains. “So when they are following along, they see them almost as peers. It’s really relatable. We want to build that science identity in the students that we’re working with.”

That ethos, of building a STEM community by fostering connections between UMaine and local classrooms, is now a key component of the program. In each of the three seasons since Rodda’s inaugural expedition, graduate researchers have remained committed to sharing their research in ways that facilitate learning, generate conversation, and inspire young learners.

FAR expands from Maine – to beyond

As the program has grown, so has the audience. Classrooms across New England and beyond followed UMaine graduate researcher Kit Hamley she traveled to the Falkland Islands, Ph.D. student Lynn Kaluzienski as she visited the McMurdo Shear Zone in Antarctica, and, most recently, Ph.D. student Tyler Van Kirk as he studied invasive species along the coast of Maine. And, while classrooms throughout the country follow along via Twitter, some local students are also able to meet the researchers during visits to UMaine.

“All of the [FAR] graduate students have been so open to visiting local classrooms or having students come on campus,” says Wilson. For many, this presents an opportunity to meet the scientists and also visit the campus where they may one day want to become researchers themselves. “That was a big thing,” she continues. “To highlight that there are incredible opportunities here, at our local university. Kids don’t necessarily get that message. They think science happens in faraway places or in big governmental organizations, but it is going on here.”

And, the opportunities continue to present themselves. Wilson has received multiple inquiries from researchers who would like to share their work with younger audiences and she knows that there is a demand for the program in K-12 classrooms. Wilson and Kranich, now a Cooperative Extension 4-H Science Youth Development Professional, are developing plans for expansion in the coming years.

Most recently, the Cooperative Extension team partnered with ME EPSCoR to produce Expedition 4: Maine Coast. The expedition featured Van Kirk, a ME EPSCoR/SEANET Fellow, who is studying the invasive green crab (Carcinus maenas) species in the state’s coastal communities.

While this partnership allowed the program to expand FAR’s production scale, it also highlighted the impact of research happening within the state. By building continually on the program’s inquiry-based learning model, UMaine researchers serve as reminders that science can happen anywhere – be it in the Peruvian Andes or in our own backyard.

“It’s the Cooperative Extension’s role to get this story out to the public,” Wilson concludes. “We have an opportunity to communicate the message of the really cool stuff we have going on at UMaine.”

It’s a good thing, too. Our future scientists are watching. 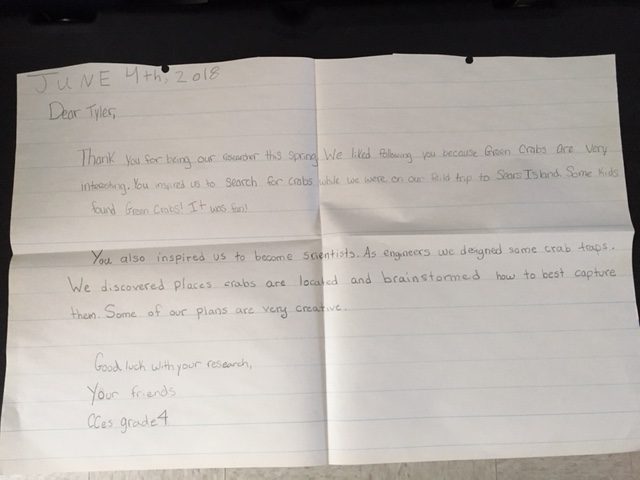 Van Kirk received a heartfelt thank you from one fourth-grade class: Dear Tyler, Thank you for being our researcher this spring. We liked following you because green crabs are very interesting. You inspired us to search for crabs while we were on our field trip to Sears Island. Some kids found green crabs! It was fun! You also inspired us to become scientists. As engineers we designed some crab traps. We discovered places crabs are located and brainstormed how to best capture them. Some of our plans are very creative. Good luck with your research, Your friends: CCES Grade 4 June 4, 2018