Waste Not, Want Not

Before moving to Brooklyn, New York in 2008, Brie Berry lived for two years in a rural area of the West African Republic of Mali as a Peace Corps volunteer. And it was her experience in Mali that provided Berry with the foundation of the future research efforts she now focuses on at UMaine.

“I joined the Peace Corps to experience what it was like to live in another place with a very different culture,” says Berry, who earned a master’s degree in urban affairs from Hunter College. “I worked as an agricultural extension volunteer providing support to communities doing composting, fish farming, and eco-tourism. It was very eye opening and sparked my interest in sustainability.”

That’s because, Berry says, “There’s a strong culture of reuse in Mali and it was amazing to see the things people were using over and over again. Street vendors sold sweet potato fries that were wrapped in children’s old homework assignments and people would strip bike tire tubes and sell them as bungee cords. Everything that could be was used again.” Including her own “garbage.” Kids routinely went through the trash she tossed out at first to pick out all the good stuff.

“Man, I remember thinking, they have some really different ideas about waste here, and it really made me rethink my own practices and spurred my work in sustainability as a whole.” Thus, Berry spent the next eight years exploring various aspects of sustainability and getting as many diverse experiences as she could.

“I wanted to see what was happening in the broad spectrum of sustainability, what aspects were most interesting to me and how I might be able to make the biggest impact in pursuing sustainability work,” Berry says. Not surprisingly, she ended up sharply focused on the reuse of materials and is currently working in this area as a member of the Mitchell Center’s Materials Management team. Berry’s advisor is Materials Management team member Cindy Isenhour, UMaine assistant professor of anthropology and Mitchell Center for Sustainability Solutions associate. One aspect of Isenhour’s research is Maine’s thriving reuse economy.

Berry, who grew up in Pennsylvania and Minnesota, met her future husband in Mali where he, too, was a Peace Corps volunteer. He was originally from Texas and, upon returning from Mali, the couple realized neither wanted to go back to their respective home states and, instead, headed off to New York City.

“We had both lived in these tiny little towns in West Africa for two years so we just wanted the biggest city we could find,” she says.

They ended up in Brooklyn where Berry began doing urban sustainability work in natural areas, environmental education in city parks, energy efficiency work, and the like. Says Berry, “And I was part of the zero-waste school rollout they were doing in New York City, which has a goal of sending zero waste to landfills by 2030.” Part of that goal involves increasing recycling diversion and organics diversion in public schools, and Berry was in the schools helping to roll that program out right before coming to UMaine.

“It was a lot of fun and the materials management team here is really focused on food waste so that’s a really nice connection between the hands-on work I was doing in New York and coming to Maine to continuing that in some respects.”

Berry says she never seriously considered pursuing a Ph.D. but was, rather, really focused on applied work and making a difference at the municipal level. But the more hands-on work she did in New York the more she began to realize how much research is needed to get to the bottom of the waste reduction issue and figure out how best to support waste reduction efforts.

Besides, she adds, “I was kind of getting antsy in New York. My work was important but it wasn’t making the kind of difference I wanted to make.”

Then, as luck would have it, she ran across a short piece in Anthropology News written by Isenhour that piqued her interest and led her to contact Isenhour directly. “I reached out to her because I liked what she wrote and wanted to read more. So, initially, I was just asking her for resources.”

But she also looked more closely into Isenhour’s background and interests and current work, including her role as graduate coordinator for the Anthropology and Environmental Policy program at the university, and realized that was a great fit for her interests.

“So I decided to come to Maine to study with Cindy because all her work is really focused on reuse and consumption and waste and she’s an anthropologist, which is my background, too.”

While Berry notes that the Materials Management project delves into a whole host of solid waste-related issues, she, like Isenhour, is particularly interested in studying the social, economic and environmental aspects of reuse economies. 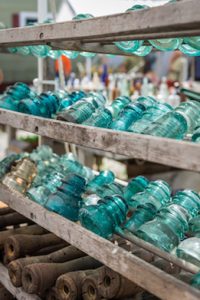 “I’m most interested in reuse,” Berry says. “Rather than recycling that takes materials, breaks them down and transforms into something different, reuse just takes an object and uses it again for the same purpose, so you get a lot of energy savings because, for example, you’re not melting something down or burning it up to create something new.”

Further, Berry is particularly interested in studying whether or not there could be some real economic benefits to reuse such as “these really vibrant communities that are perhaps more resilient than those just focused on purchasing things that are new, at a store, all the time. Something I’m really interested in right now is how reuse might actually build relationships between people—this idea that maybe reuse can build social capital, or webs of trust and connection between people.”

Berry says that while that may sound like an idealistic goal in a capitalistic economy, there are already communities built on a strong foundation of reuse—like the Brooklyn neighborhood she came from. The Gowanas neighborhood already has an e-waste recycling facility, a community composting facility, and a deconstruction and reuse warehouse. “And these organizations/institutions weren’t just isolated things not involved in the neighborhood, they interface with each other—the e-waste store works with the reuse store, etcetera,” she says.

She adds, “And I think that creates something essential to the community fabric and I definitely think there’s a case for it in terms of building relationships between people. Think of a garage sale—I’m selling my personal possessions that have a little bit of meaning in them, it’s not just a brand-new thing. I’ve owned it and used it and selling it to another person and connecting with that person. No one has really talked about how to measure that or what kind of impact that might have in the bigger picture, but I think there’s something there and something that’s pretty valuable.”

Berry notes that the Materials Management project is also beginning to understand Maine’s strong reuse economy and there is some preliminary evidence that there is a strong culture of reuse in Maine.

This summer, she’ll be working with Isenhour on an ethnographic field school situated in Maine and focused on the reuse economy that will introduce undergraduate students to anthropological methodology. And, as part of a larger reuse project, they’ve also begun analyzing preliminary results from a survey of Maine formal reuse establishments, like thrift and antique stores. “We’re looking particularly at how reuse might be a resilience strategy in communities facing economic decline.”

Berry will also be presenting a talk on reducing food waste and food insecurity at the upcoming Sustainability and Water Conference March 30 in Augusta—research based on her work with the Mitchell Center’s Materials Management team and the Margaret Chase Smith Policy Center. Additionally, several members of the team will present research related to reducing waste at the conference.