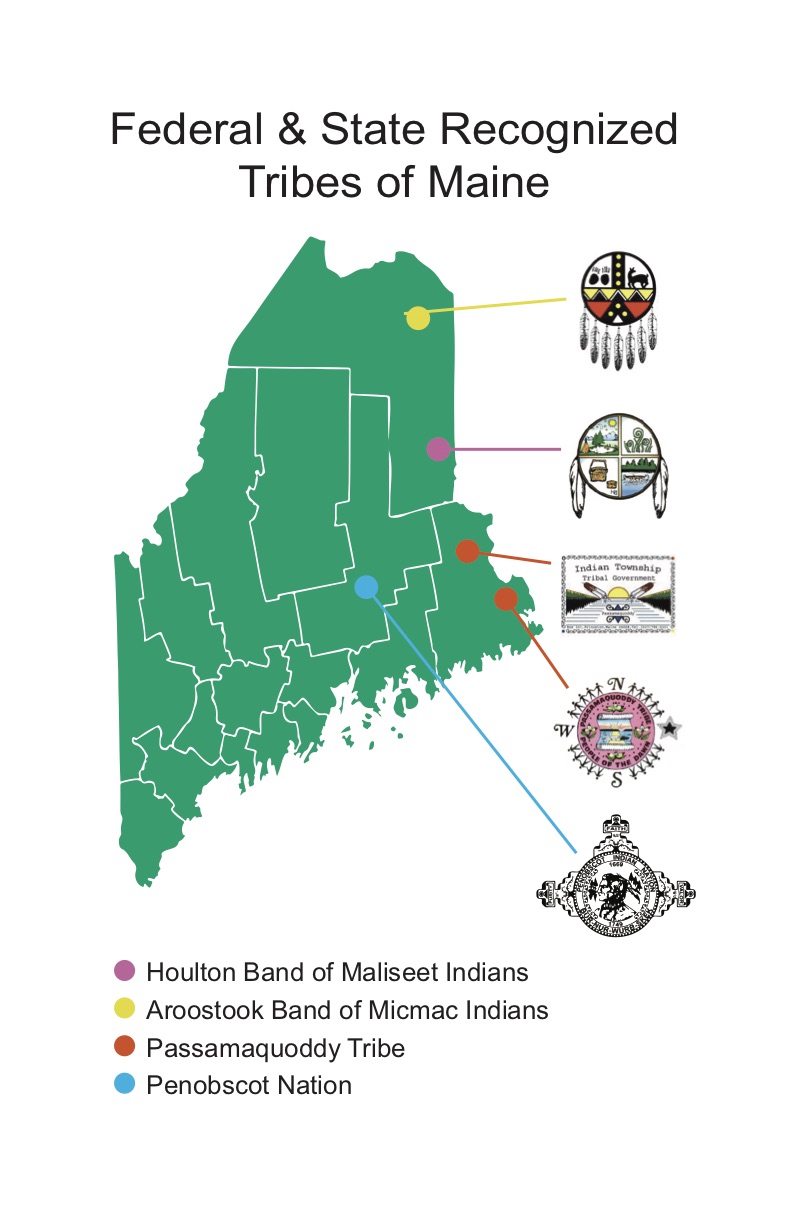 The Wabanaki are the people of the Dawnland and this exhibit features art forms of the Maliseet, Micmac, Penobscot, Passamaquoddy, and Abenaki.

Glooscap, or Gluskabe, is a Wabanaki culture hero with supernatural powers, who is central to many Wabanaki legends.  He brought forth the people from the brown ash tree and when he smashed the frog monster, the Penobscot River was created.  He taught the people how to use and respect the natural resources—the plants, trees, and animals and how to make shelter and objects essential to life.

The brown ash tree is central to Wabanaki culture and to the art of making baskets.  In Wabanaki creation myths, Gluskabe fired an arrow into a brown ash tree, and out of the tree came the people.

The tree,  when “pounded” with the back an ax, splits apart between each growth rings producing splints to make baskets.  These splints can be scraped and thinned with a knife, split in half, gauged into various size widths, and dyed with either natural or commercial dyes.

Today, the brown ash tree threatened by an invasive insect species–Emerald Ash Borer, which has destroying all species of ash trees from the Great Lakes to the Northeast.

If you would like to learn more, please visit these online exhibits: Tree and Tradition: Brown Ash and Native American Basketmaking and Transcending Traditions.

Sweetgrass is a fragrant grass that grows in marshy area and is harvested by the Wabanaki to be woven into baskets.  The sweetgrass is often braided prior to weaving, and has a pleasant scent for a very long time. It is commonly used in fancy baskets.

Hong Kong cord is a manufactured cord imported from Hong Kong and was used as a sturdy substitute for braided sweetgrass from about 1920 until the 1960s when it became difficult to obtain. 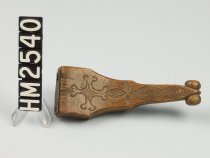 Gauges have sharp “teeth” of various widths, which allow a single splint of brown ash to be cut into various uniform widths for basketmaking.  Depending on the thickness and pliability of the ash, gauged splints may be used for weavers or standards.

Weavers are the splints that are wrapped or interlaced around fixed standards. In weaving, each row alternates to lock the rows of weavers around the standards. 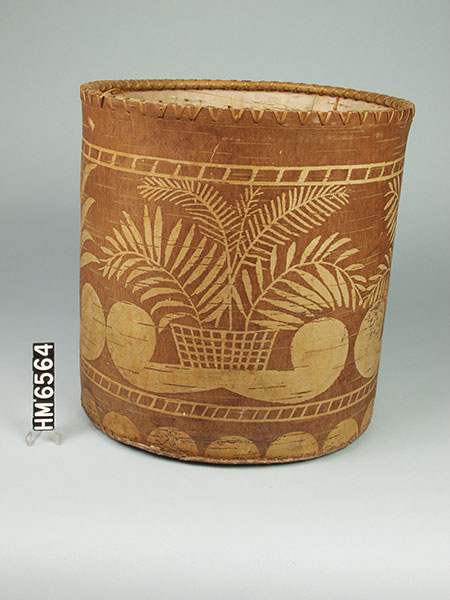 Birchbark was the fabric in the Northeast.  Bark from the paper birch trees was water-proof, insect-resistant, odorless, and rot resistant.  The color of the inner bark depends on when the bark is harvested.  Winter bark is a dark brown color and can be etched with designs, while summer bark is a much lighter color and can not be etched.  Birchbark was used for containers, moose calls, and, most importantly, canoes and wigwams.

Wigwams provided shelter for the Wabanaki people, and this word means “house” in the Abenaki language.  Some wigwams are dome-shaped while others are similar to tipis.  All have openings in the center of the roof to allow smoke from a central hearth to escape.  The Hudson Museum’s YouTube channel has a video of former Penobscot chief Barry Dana and his family building a traditional wigwam in the Hudson Museum.

Pine pitch is made out of pinesap that, when boiled down and mixed with animal fat, can be used to seal seams and cracks, or to repair damage to birchbark objects.  It is essential in canoe making.

The Waltes game is a traditional Wabanaki dice game played with a hardwood bowl and six disc-shaped dice, with one round and one flat side.  51 plain sticks, three sticks with an arrow tail feather design, and one stick with an arrow point design help score the game.  Players take turns throwing the dice and collecting sticks until the sticks are gone and the game ends, with the player with the most sticks winning.

If you would like to play to this yourselves, please click here for instructions for a simplified version on how to play the game. 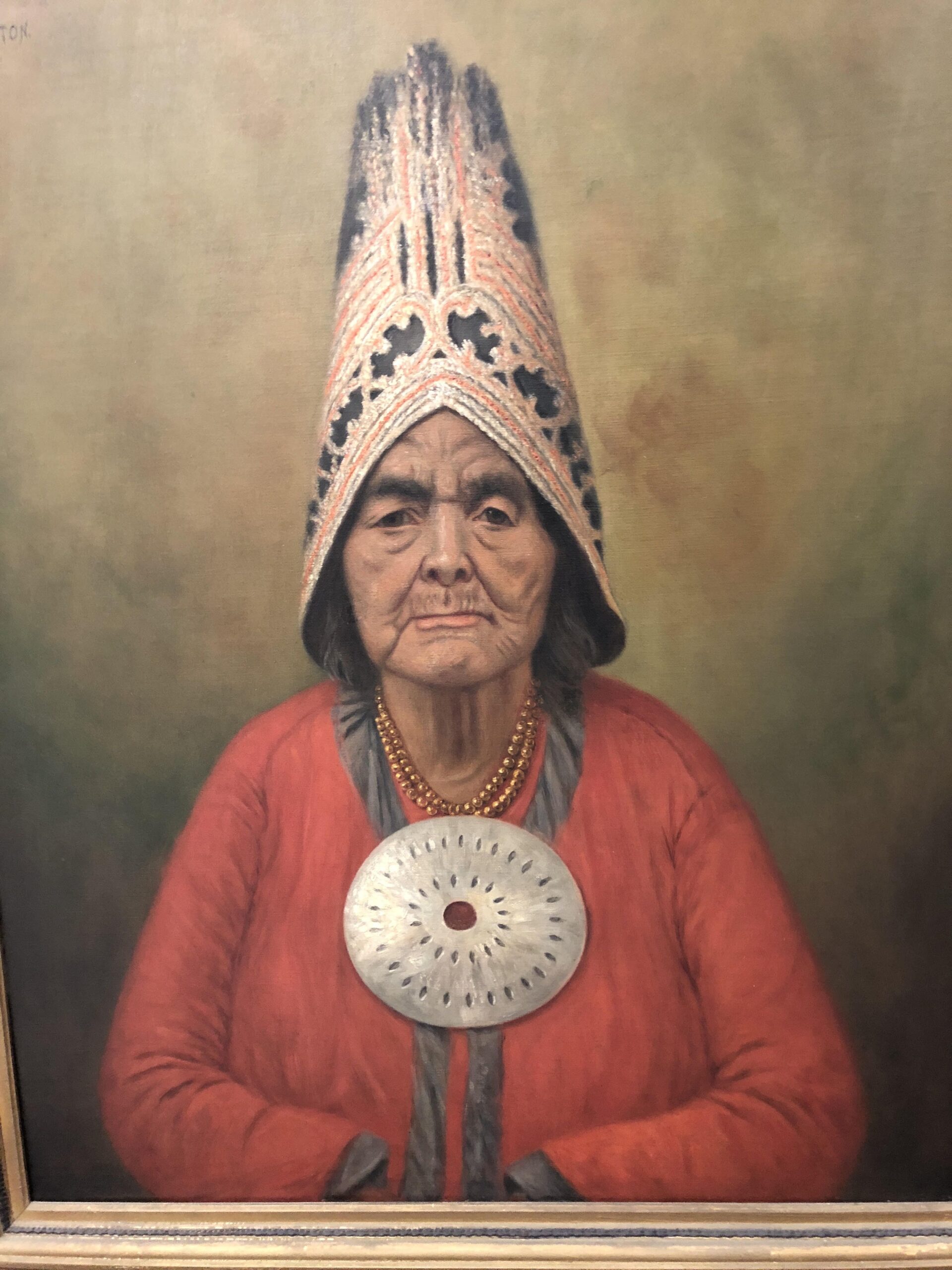 On loan from the collection of the Tarratine Club, Bangor, Maine

Molly Pelagie was a Penobscot woman who earned a reputation as a healer and a medicine woman.  Born in 1775, during a period when Penobscot lands in eastern Maine were increasingly being occupied by English and later American settlers, she became known in the non-Native community as Molly Molasses.  In this posthumous portrait by Isabel Graham Eaton—most likely created from a photograph—she wears a peaked cap and a large silver brooch. Eaton was a native of Bangor and a student of Maine artist Jeremiah Pearson Hardy.  She became a well-regarded portraitist in Bangor at the end of the nineteenth century. 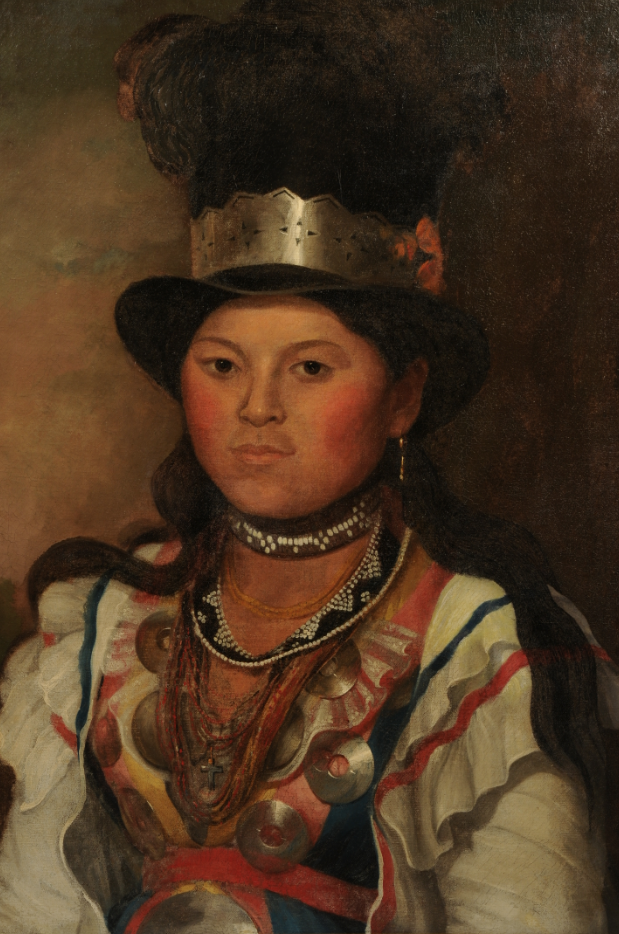 Both of these portraits are on loan to the Hudson Museum from the Tarratine Club of Bangor.