The Hudson Museum maintains a collection of over 9,000 ethnographic and archaeological objects including a world class assemblage of Pre-Columbian ceramics, lithics and gold work dating from 2000 BC to the time of the Spanish Conquest. This collection is complemented by contemporary ethnographic objects from Mexico, Guatemala and Panama.

The collections of the Hudson Museum are in compliance with Public Law 101-601, the Native American Graves Protection and Repatriation Act of 1990 and Title III of Public Law 97-466, and the Convention on Cultural Property Implementation Act of 1983.

Learn about donating to the collections.

Explore the Collections in our New On-line Database

The Hudson Museum’s collections are unique in the region allowing for the exploration of non-Western cultures ranging from Aztec to Zulu.  There are over 9,000 objects to peruse.  Two hundred examples of Maya art ranging from elaborately decorated cacoa pots (chocolate drinking vessels) to ball court markers and a one and a half-ton stelae.

At the Hudson, you can compare and contrast Native American cultures from the Arctic, Pacific Northwest, Plains, and Southwest too.  We also have an extraordinary collection of African art and ethnographic collections from Melanesia, Micronesia and Polynesia.

We invite you to see visit our world-class holdings on the web! 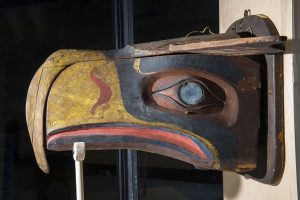 Among the collections of the Hudson Museum is a Northwest Coast transformation mask that inspired the Seattle Seahawks logo.  When the Seahawks won the Super Bowl in 2014, the Burke Museum at the University of Washington posted a blog about this mask and to the writer’s surprise, we notified them that the mask was at the University of Maine.

The mask, known here as HM5521, is part of the Hudson Museum’s William P. Palmer III Collection.  Palmer, of the UMaine Class of ’58, was a great supporter of UMaine Athletics and left his world-class collections to the University.

In November 2015, the mask travelled to the Burke Museum at the University of Washington in Seattle to be included in a temporary exhibit.  It was unveiled at a press conference with the Lombardi Trophy and former members of the Seattle Seahawks, including quarterback Jim Zorn.  The mask from Maine has been a huge hit at the Burke and has even been visited by the governor of Washington.

The mask has returned to Orono, and is on display at the Hudson Museum.

The William P. Palmer III Collection represents a broad spectrum of Precolumbian and Northwest Coast art collected between 1958 and 1970 and provides the foundation for the traveling exhibits Images for Eternity: West Mexican Tomb Figures, Worldviews: Maya Ceramics from the Palmer Collection, and Cosmos in Clay: Ancient Ceramics and Gold from Panama and are also featured prominently in our new World Cultures gallery.

Objects in the collection include over 800 tomb figures from the Colima, Jalisco and Nayarit cultures of Western Mexico, making it the largest institutional collection in the United States and a significant resource to researchers and the general public. The collection includes 1,200 ceramic figurines, mostly from the Michoacán and Chupícuaro cultures of Mexico, as well as important examples from Teotihuacan, Maya, Tlapacoya, Tlatilco and Huastec cultures.

William Palmer’s collection of Maya artifacts includes 200 examples of ceramic, jade, bone and stone from Guatemala, Honduras and southeastern Mexico, including polychrome vases from the highland sites of Nebaj and Chamá. Over 180  ceramic, jade, stone, bone, and metal objects in the collection represent the Olmec, Aztec, Mixtec, Zapotec and Veracruz cultures of Mexico and Central America.

The Hudson Museum’s collections were formed around the core of more than 340 ethnographic objects gathered by Museum founder and former director Dr. Richard G. Emerick during his fieldwork among the Havasupai of the Southwest United States (1949-1953), the Iglulingmiut of the Canadian Arctic (1953-1954) and the Kapingamarangi and Kusai of Micronesia and Western Polynesia (1956-1957).

In addition, his collection includes objects collected by Arctic explorer Vilhjamur Stefansson (1906-1912), including weaponry and domestic items, and objects from the North American Plains and Pacific Northwest.

In 1972, the Portland Society of Natural History closed its doors, placing a major portion of its ethnographic and archaeological collections on permanent loan to The University of Maine. Resolution of that loan gave the Hudson Museum title to 195 ethnographic and 870 archaeological specimens. Archaeological specimens include 61 Mississippian stone and ceramic objects, some of which were collected and documented in the personal journal of Maj. C.H. Bayd. Other archaeological materials include a number of sherds and stone tools collected from the ground surface in New England, the Southeast, Plains and Southwest.

The ethnographic portion of the collection consists of 67 examples of Plains material culture, some collected by Col. Henry Inman, and 51 items from the Southwest, such as the Mabel Weeks Collection of Pueblo pottery and Navajo textiles, with four rugs dating from 1900-1920. The ethnographic collections are rounded out by 41 objects from Asia and smaller assemblages of items from the Arctic, South America and Micronesia.

Donated to the Hudson Museum through the Salgo Trust for Education, the Nicolas M. Salgo Collection forms the foundation of the Museum’s New Guinea collection and includes objects collected by Ambassador Salgo from the Sepik River region of Papua-New Guinea in 1980. The collection includes examples of art work by the Abelam, Iatmul, Ewa, Chambri and Papuan cultures located along the Sepik, Karawari and Black Rivers in the East Sepik Province of Papua-New Guinea. Most of the collection represents art manufactured for sale to tourists modeled after male cult objects. These objects show the impact of the Western art market on traditional lifeways of the Sepik River.

The depth of the Museum’s New Guinea collection was supplemented in 1996 by the Faith White Collection, donated in memory of Ralph White, MA 1939, University of Maine. The majority of the 58 piece collection was assembled by Ralph White when he was stationed in Papua-New Guinea and the Philippines as a member of the U.S. Army Signal Corps (1944-1945).

Collected during a period prior to extensive contact with the Western world, the collection includes objects from the Tari culture of Papua-New Guinea, dating from 1880-1890. The collection also includes 16 traditional musical instruments, figurines and leather theatrical screens (nang yai) from Thailand, Cambodia and Laos.

The Wabanaki collections consist of more than 1700 objects and features the largest institutional collection of Penobscot basketmaking tools in the nation, including basket molds, splint gauges, crooked knives, awls and numerous samples of basketmaking material including ash splints, China (or Hong Kong) cord and sweetgrass braids.

Shay was the daughter of Sebattis Shay and Mary Ranco, the wife of marathon runner Andrew Sockalexis and the sister-in-law of Florence Nicolar Shay and by extension her sister Lucy Nicolar Poolaw, influential Penobscot women within the community as political activists and business women. This collection of 145 objects included inventory from Pauline’s home-based shop of baskets and novelty goods, such as root clubs and walking sticks, birchbark containers, basketmaking tools such as splint gauges and blocks, as well as family heirlooms.

The Leo and Florence Shay Collection

Robert H. Anderson was a member of the Shay basketmaking family.  He sought to document Penobscot basketmaking by collecting family basketmaking tools and examples of brown ash and sweetgrass baskets that date from 1850 to the present.  He left the contents of his Basket Museum to the Hudson in 2021—over 340 objects, including the largest collection of Penobscot basketmaking tools found anywhere in the world.  Anderson bequeathed his collection to the Hudson Museum to hold in in Trust until such time as the Penobscot Nation has a new museum facility to receive it.

Frank Siebert (1912-1998) was a gifted, but eccentric scholar who became fixated on Penobscot language and devoted his life to this project.  Trained not as a linguist, but as a pathologist, Frank pursued a medical career, but made regular visits to Indian Island to conduct research between 1932 and 1970.  Upon retirement in 1970, he moved to Old Town, Maine and devoted his full attention to documenting Penobscot language.

As part of his research, Frank acquired Penobscot material clothing, tools and domestic items from his informants.  Among this collection are examples of object forms found in no other institution.  The Hudson acquired 57 rare examples of birchbark work, snowsnakes, basswood tumplines, canoe making tools, beadwork, a powder horn, and basket and basketmaking tools, as one of only three public collecting institutions to acquire objects from this collection.

The last members of the Stanislaus family left baskets, regalia, musical instruments, and objects made for sale to others to a local non-Native family in the 1940s.  In 2021, this family donated 59 objects to the Hudson Museum, including an early 20th century set of regalia a worn by the family at 1901 Pan American Exposition in Buffalo, New York, along with archival images dating from 1860 to 1940.