Waltes was a traditional game played by the Passamaquoddy, Penobscot, Maliseet and Micmac. This version of the game is adapted from information found in Frank G. Speck’s Penobscot Man (1940) and Stewart Culin’s Games of the North American Indians (1907). The game rules have been simplified to allow elementary school children to play. 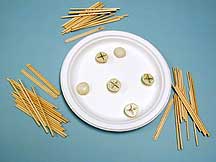 • Polymer clay, such as Sculpey™, in white or off-white
• Bamboo kabob skewers. Enough to make 51, 6-inch counting sticks
• 4 craft sticks
• A sturdy paper plate such as Chinet™ for the waltes bowl

Make 6 round dice that are domed on one side and flat on the other. To make the dice, you may wish to shape them in a watercolor paint tray or mini ice cube tray. Follow directions for baking the clay. When the dice are cool, decorate the flat side with a permanent, felt-tipped pen. Use the same design to decorate all six dice. Use some of the dice designs below or create your own.

Next, make the counting sticks. Cut the bamboo kabob skewers into 6-inch lengths, discarding the sharp points. A pair of pliers works well for this task. You will need to make 51 plain, round counting sticks. To make the other counters, take 3 of the craft sticks and draw the fletching of an arrow on one side. On the remaining craft stick, draw the arrow’s point.

Each player takes three turns dropping the dice. A player shakes the six dice and drops them into the waltes bowl. A player who drops his or her dice on the ground, rather than in the bowl, loses his or her turn. For each die that lands with its decorated side up, the player is awarded a wooden counting stick (see scoring count above). After a player has completed his or her three throws, the dice are passed to the next player. If all four craft sticks are claimed by a single player, that player receives four additional round counting sticks as a bonus.

The game continues until all the wooden counters are distributed. Each player counts his or her sticks. Each round stick counts as 1; the arrow fletching counts as 5; and the arrow point counts as 6. The player with the highest score wins.