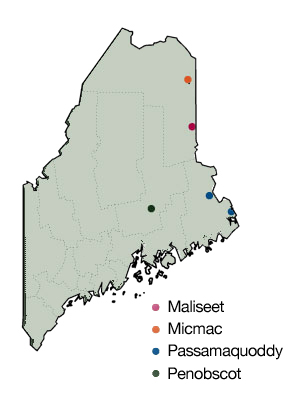 Maliseet Nations
The Maliseets traditionally occupied the area about the eastern boarder of Canada and the United States. In Maine, the Houlton Band of Maliseets is located in Aroostook County. The tribe received United States federal recognition in 1980.

Mi’kmaq Nations
The ancestral lands of the Mi’kmaq extend from Newfoundland to Maine. The Mi’kmaq Nation is located in Presque Isle. They received U.S. federal recognition in 1991.

Passamaquoddy
The Passamaquoddy tribe is located in eastern Maine in Washington County. There are two reservations, one at Sipayik (Pleasant Point) in Perry and the other in Indian Township, which includes the villages of Motahkomiqkuk (Peter Dana Point) and Odeneg in Princeton.