Supporting decision-making under climate variability and change: multi-scale forecasts and analyses for the Maine lobster fishery

The fishery for American lobster (Homarus americanus) is one of the most valuable in the United States, and the fishery is especially important in the state of Maine.  80% of all US lobsters are landed in Maine, and the lobster fishery accounts for 78% of all fishery landings in the state.  The high dependence of Maine’s coastal economy on this single fishery means that even small changes in the volume of lobster landings have a large impact in the region. We propose to work with stakeholders in Maine’s lobster fishery to develop a range of forecasts products to help the industry prepare for future changes in the lobster fishery.

One of the main questions facing the fishery is whether the current boom in lobster landings is likely to end. Since 1989, we have monitored lobster settlement at fixed stations throughout New England.  We have developed a model that uses settlement in a region to accurately project landings several years in the future.  The time between settlement and recruitment to the fishery depends on temperature, with lobsters in Rhode Island requiring fewer than six years while Maine lobsters require approximately 8 years.  This means that which cohorts contribute to the landings in a given year depends on temperature conditions during the juvenile period.  Using this model, we can trace the recent period of record landings back to several years of very strong settlement that peaked in 2008.  Notably, lobster settlement declined to record low levels in 2013 and remained below average in 2014.  This suggests that Maine may begin to experience a downturn in landings around 2019.  We propose to make several improvements to this model, including more rigorous error propagation and skill assessment and inclusion of shell disease and predators as sources of mortality.  We will then project future landings under six different temperature scenarios that encompass the range of possible future conditions.

We have also developed a model to forecast the date when Maine’s fishery will switch to the high catch rate typical of the summer fishery.  This model was motivated by our experience in 2012. In 2012, the Gulf of Maine was at the center of a record “ocean heatwave,” and this event helped expose the vulnerability of Maine’s lobster fishery to changes in temperature (Mills et al. 2013).  The warm conditions in 2012 caused lobsters to begin their annual inshore migration almost a month earlier than normal, leading to an abrupt increase in catch rates.  In 2012, the influx of lobsters overwhelmed the capacity of the supply chain to store and process lobsters, and the warm conditions meant that many lobsters died in storage or in transit.  Prices declined to record low levels, making 2012 a stressful year for many lobstermen, despite high landings.  Motivated by the experience in 2012, we developed an empirical model that can predict the transition to the high-landings period several months in advance, and we began issuing operational forecasts this past spring. We propose to add the ability to forecast the volume of landings in addition to the timing.  This will be done using a classification procedure that distinguishes between different patterns of annual landings.

Our project will leverage prior investments in academic science and will turn the models we have developed into forecast products that can help Maine’s lobster industry adapt to climate variability and change.  Over the last 34 years, the Gulf of Maine has warmed rapidly.  There is a strong need for tools and information products to help fishery stakeholders understand the implications of this warming and the impact of likely future conditions. We expect that the process we use to develop the tools in collaboration with the industry, even more than the tools themselves, will serve as a model to help fisheries beyond lobster adapt to climate variability and change. 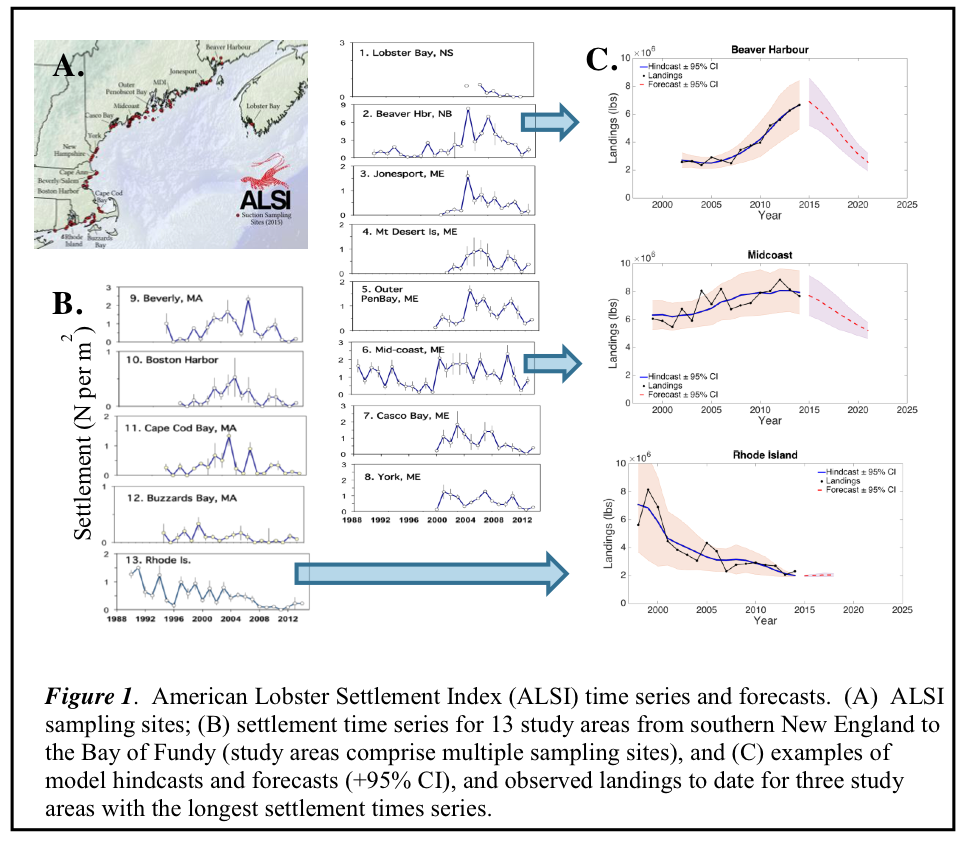