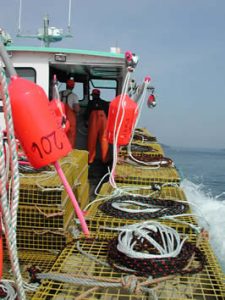 As the result of a successful NEC Project Development award, the collaborators submitted a full proposal to employ artificial collectors to evaluate deep water postlarval settlement of the American lobster along the New England coast. For lack of empirical data, spatial models being developed to simulate regional production of US lobster stocks are forced to make untested assumptions about the numbers of lobsters recruiting to the benthos in deep water via postlarval settlement. Because the areas involved are so extensive, the difference in production estimates between those that assume no deep-water settlement and those that assume even very low-density settlement are dramatic.  The proposed project aims to evaluate the extent to which lobster postlarvae settle in deep, outer coastal and offshore waters of the eastern and western Gulf of Maine and the southern New England shelf. Because of oceanographic and thermal differences between the three regions, we hypothesize the depth of postlarval settlement will vary geographically. The research approach is to deploy cobble-filled passive postlarval collectors over a range of depths in the three regions.  Three-hundred collectors will be distributed among three depth intervals (10-20, 30-50, and 70-80 m) along inshore-to-offshore transects off eastern and midcoast Maine, as well as Rhode Island.  Water column thermal structure will be described at all three regions. Settlement in the shallowest collectors will be compared to densities of settlers in adjacent cobble nurseries monitored at the same depth as part of the state-supported New England Lobster Settlement Index surveys.  The proposed 2-yr project lends itself to harvester collaboration and will have immediate impact on stock assessment models. The harvester-scientist team has extensive complementary experience in lobster fishery research. The project also complements current monitoring and research supported by the New England states, NOAA and NSF.