Settlement patterns of the American Lobster in the Gulf of Maine and Southern New England (NSF:NOAA/NURP) 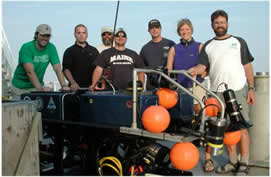 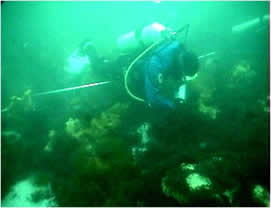 Understanding how pre- and post-settlement processes interact to govern the dynamics of marine open populations remains a central issue in marine ecology.  In this study the American lobster Homarus americanus is used as a model system to determine how nursery habitat structure influences post-settlement mortality and dispersal.  The central theme of the study is to find if cobble landscape structure (i.e., patchiness) and gradients in lobster population density, predator abundance and predator diversity along the New England coastline interact to cause regional variation in the strength of a hypothesized juvenile lobster demographic bottleneck.  As juvenile lobsters reach the emergent phase they must forage outside of cobble shelter and may become shelter limited even though they have not reached a size refuge from predators (e.g., groundfish). The underlying hypothesis is that cobble patchiness and shelter limitation will cause a demographic bottleneck that limits lobster abundance in regions of high predator density (e.g., southern New England) but not in regions of low predator density (e.g., Maine).

Supplementing more than a decade of state-supported postlarval settlement surveys along the New England coast, the PIs have been funded by NOAA’s National Undersea Research Center in 2003-2004 to conduct sidescan sonar, ROV and scuba surveys to evaluate the regional linkage between lobster abundance and habitat use with indices of cobble habitat structure and settlement strength.  They will complement these surveys with manipulative experiments proposed here to determine if regional differences exist in: (1) lobster movements among habitat patches; (2) predation risk; (3) local shelter limitation; and 4) shelter fidelity (propensity to switch shelters).
Results of the integrated projects will aid resource managers and the fishing industry in the continued development of predictive tools for the fishery.  The proposed research will form the basis for two graduate students, and at least four undergraduates per year will serve as interns earning academic credit.  Another important educational component of this project is the continued development of an interactive CD and web-based activity called Hatch-to-Catch already recognized by the National Science Teachers Association as a useful educational tool for K-12 learning (see SciLinks).

Hovel, K. A., R. A. Wahle. 2010. Effects of habitat patchiness on American lobster movement across a gradient of predation risk and shelter competition. Ecology 91:1993–2002.