As we work towards our future in the University Club, our board members thought it would be beneficial to learn more about it’s past. When did the Club begin? Where has the Club been held over the years? When was it the most popular? What has the Club done for their members in the past?

A people without the knowledge of their past history, origin and culture is like a tree without roots.

Our staff has been poring through old campus magazines, sifting through articles and photo files, interviewing previous members, and piecing together dates and events for many weeks. We are excited to present to you what we have discovered and hope that you will continue to partner with us as we work towards a promising future for our University Club. 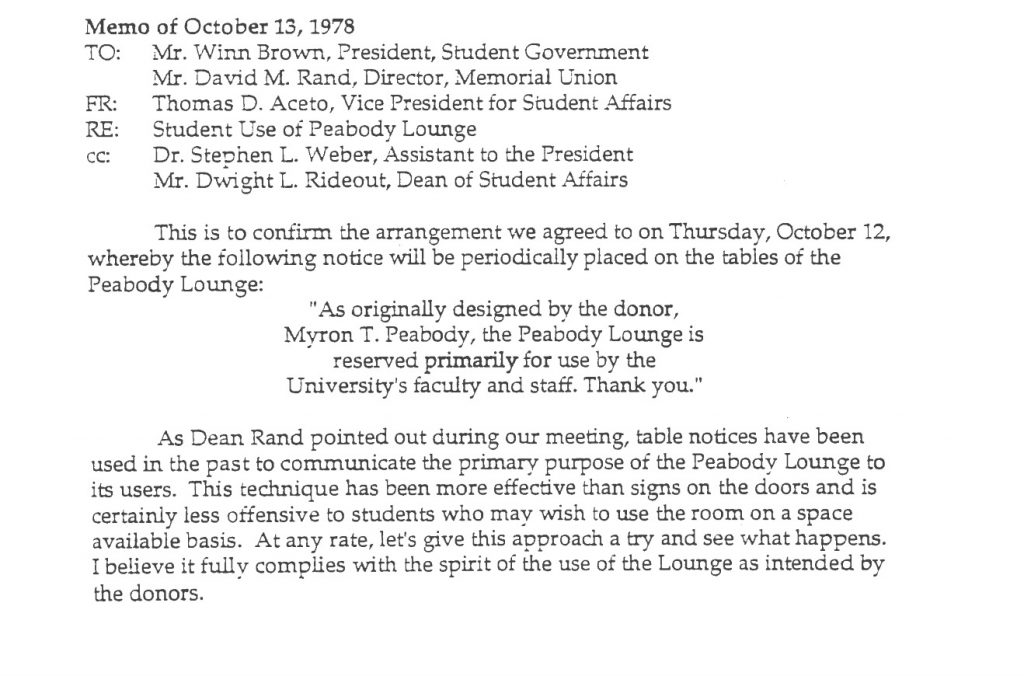 On October 13, 1978, faculty members from the University of Maine came together to designate a room in the Memorial Union as an alumni-faculty lounge. The Peabody Room would be used for serving light refreshments and tea to faculty and alumni. This would be a place for faculty and staff members to relax, hold receptions, and meet in groups for various meetings and functions.1

In December of 1982, a questionnaire was sent to all faculty and staff at the University regarding the lounge. There were responses from 47% of the faculty, 19% of administrative staff and 62% of administrators. The results showed that close to 300 people were willing to pay dues for an actual Club. The responses also showed that staff were willing to purchase approximately 500 lunches per week through the Club.5

In May of 1983, Peabody Lounge was officially approved by the Memorial Union Council to be used as a University Club.5

In June of 1983, a meeting was held and a committee was appointed to draft a Club Constitution and to decide how to utilize Peabody Lounge for the Club. Bylaws were drawn up, then circulated among faculty members.5

On October 14, 1983, there was a campus-wide meeting to draw up architectural features and to schedule construction. About 50 people attended the meeting.5

The plans were to have the Club where the Ford Room and Peabody Lounge were and to also include a janitor’s closet and another adjacent room. Plans included adding a partition with a door across the hall that would designate the area as “The University Club”.4 The initial estimate for renovations was $5,000, which was provided for by a fund set up by the same 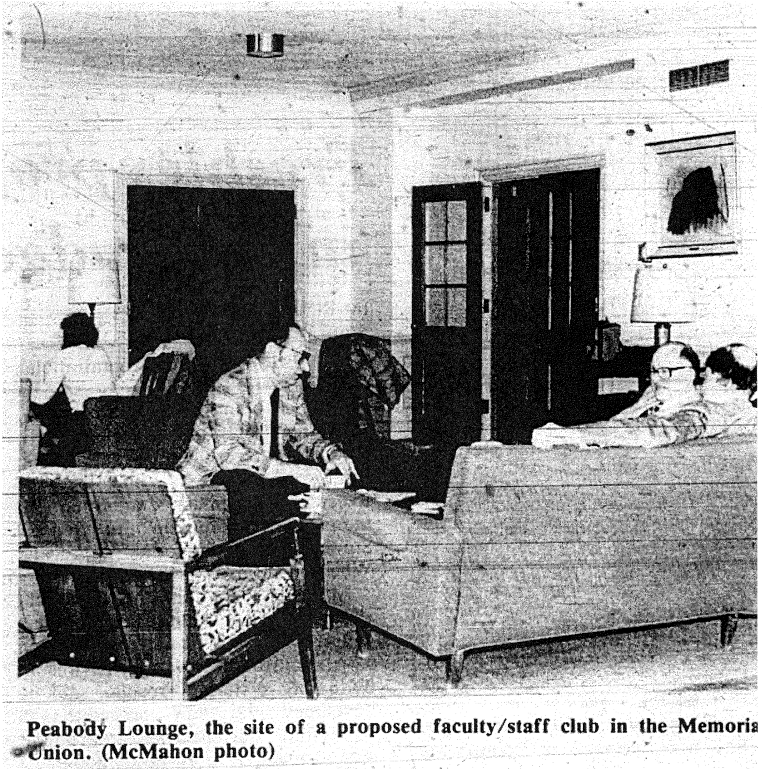 people who donated money for the creation of the Ford Room.2

David Rand, the director of the Memorial Union, said that when the Union was built in 1953, donations were solicited to help in the construction. He said each donor had the prerogative of determining how his donation would be used. Therefore, the Peabody Lounge had been used since that time for the faculty, staff and guests.4

UMO Acting President Arthur Johnson supported the idea, and stated that most universities have a similar Club for their faculty, and he believed it would foster “intellectual interaction”.4

During the March break of 1984, the space for The University Club was renovated. The budget was bumped up to $7,500 to include new parquet flooring for the corridor, painting the new wall and touching up other areas, and adding electrical outlets in the corridor for lamps. Large wooden doors were installed across the hallway that divided two rooms, and a “University Club” sign was placed over the doors.4

On April 4, 1984, the University Club opened on a trial basis. A reception was held before the end of the semester, where the bylaws and dues were established. The draft of the bylaws stated that they could not be adopted until the Club had dues from 40 people.5

The official opening was in the Fall of 1984. Food was served on one side of the hallway, while the other side was a lounge with upholstered furniture and a bar service that was available after 4PM. People who were eligible for membership in the new exclusive Club were University of Maine faculty and staff, retirees, alumni, and their families.5

Faculty members were excited about the idea of a faculty club because it provided a place where faculty members could have lunch, or even have a drink in congenial surroundings, and it was available to use in either day or evening hours.5

At one point, there were as many as 900 members of the Club!7

In May of 1990, the Peabody Lounge was opened to all members of the campus community and continued to serve a lunch menu. In 1993, the facility shifted from serving lunch to operating as the Union Coffee Shop.6

In October of 1995, the University’s President, Fred Hutchinson, declared that Peabody Lounge would be used in a different way. The door to the Club was removed, the dining room closed, and the area was opened up to students.9 The University Club was moved from the space in the Memorial Union to the north wing of Hannibal Hamlin Hall. In preparation for the opening, minor renovations were made and minimal furnishings were added to the two first-floor rooms where the Club was located.6 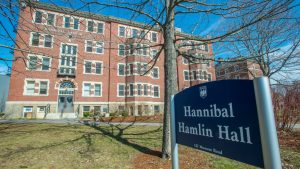 “The room in which the wall was removed has three colors of different carpeting. We’re using surplus tables that the University had in storage. The location is not ideal, but it’s what was available.”6

After leaving Hannibal Hamlin, the Club was moved to a room on the first floor of Colvin Hall for a short period of time.10

During this time, Elaine Albright, who was the Dean of Libraries, was instrumental in moving the University Club in the library. There was a search for different vendors to provide food; however, Elaine and the University’s Dining Services came to an agreement. Dining services would provide the food for the University Club and dining would use a room on the first floor (now the Oakes Room Cafe). And so at that time the University Club was approved to be in Fogler Library.10

At this time, membership was offered to all UMaine faculty, staff, administrators, retirees and alumni with Maine Cards. Only individual memberships were allowed. Hours were 9AM – 3PM Monday – Friday with complimentary hot beverages and baked goods available throughout the morning. Lunch was served 11AM – 1:30PM. The mid-day meal was homemade specialty soups and salads for $4.95. Friday afternoon wine and cheese receptions for members were also announced.8

Today, the University Club is still on the second floor of Fogler Library. Lunch is served throughout the academic year, Monday – Friday, 11:30AM – 1:30PM and coffee and tea are served from 9AM – 3PM. The Club is thriving and growing and we were excited to learn more about the Club’s history and work towards a great future for our members! 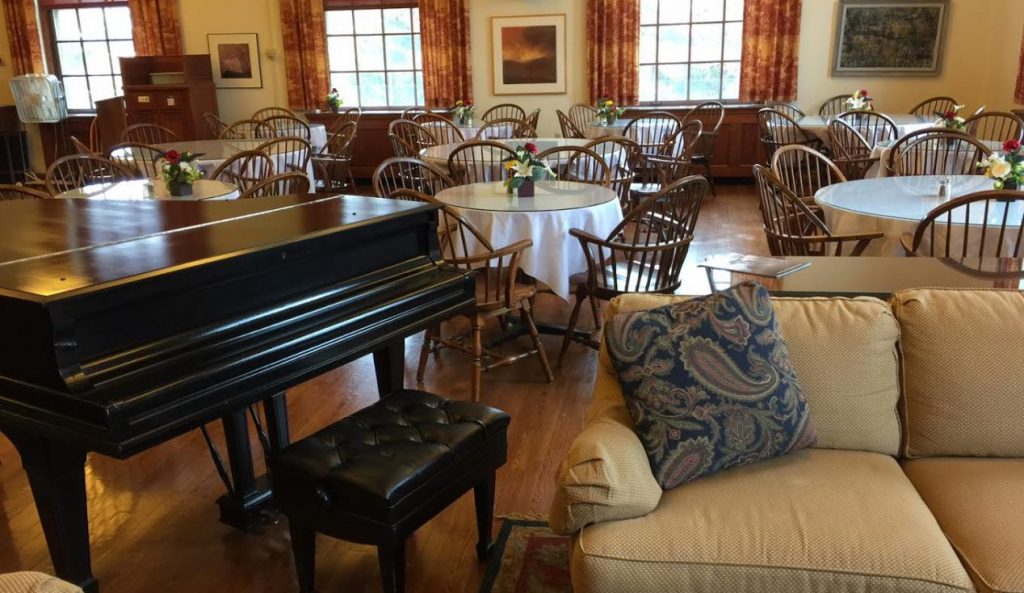