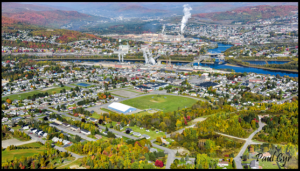 Madawaska is a little town located at the top of Aroostook County and is the northernmost town in New England. It is home to around 3,800 residents, 83% who speak French as their first language.

Prior to and during the time of European colonization, the area of what is now Madawaska was an important meeting and food-gathering place for the Maliseet people. In the latter half of the 17th century, the King of France granted land in the area in what used to be called New France.

In the middle of the 18th century, Acadian people fleeing what is now Nova Scotia settled in the area and the settlement of Madawaska was created in 1785. After Maine gained independence from Massachusetts in 1820, it annexed the land that contained Madawaska, which created tension with British Canada to the north. The Webster-Ashburton Treaty was signed in 1842, which settled the dispute. Madawaska was incorporated as a town in 1869. 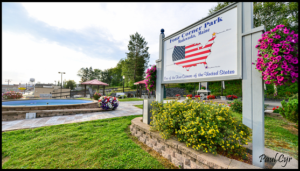 At the Acadian Festival, local families of Acadian heritage gather together to embrace their roots. There is a parade and many activities. You can see handmade local arts and crafts, like quilts and wooden sculptures. Also native to the region, are the annual bed race and Poutine Palooza.

Poutine is a regional delicacy. It is made with french fries, cheese curd, and brown gravy. Be sure to have your poutine during the Poutine Palooza festivities. The festival is usually held in mid- August.