Check back soon for upcoming events with UMaine SWE!

Members of UMaine SWE volunteered at the 3rd Annual Challenger 5K Space Race- Walk/Run on Saturday, March, 30, 2019! This annual event raised funds in support of the Challenger Learning Center’s mission to inspire STEM learning and career aspirations for Maine students. We are always excited to spend time with our SWE-sters and give back to the community!

Outreach Chair Kate Macolini and member Bailee Bartash lead a discussion on STEMINISM as a part of the Folger Library Book Club Series. Discussion topics included bio-inspired engineering and design, famous ladies in STEM, and a discussion on self-advocacy for women in the workplace.

UMaine SWE held their annual engineering formal on Saturday, February 23rd at the Buchanan Alumni House. This year’s theme was masquerade, and attendees were encouraged to wear a mask and participate in the fun. Thank you to everyone who attended and made formal so memorable!

UMaine SWE traveled to Baltimore, MD to participate in this year’s local Society of Women Engineers conference! Members were able to attend a variety of session and discussions regarding professional development and advocating for themselves in the workplace. There was also a career fair featuring more than 30 local companies. Thank you to everyone who helped make our trip a success!

Members of UMaine SWE traveled to Minneapolis, MN to attend this years SWE national conference! At the conference, members were able to participate in various different professional events, attend a career fair, and sit in on panels to learn more about professional engineering. Our chapter was awarded the Bronze Award! We are looking forward to attending next year’s national conference in Anaheim, CA! Thank you to everyone who helped make this trip possible!

SWE members traveled to Treworgy Family Orchards in Levant, ME to enjoy some of the fall festivities available there! Members were able to pick some apples, enjoy some other treats, and have a  relaxed Sunday on the farm!

Our first meeting of the semester was held on September 20th, and gave current members a chance to catch up, while new members were able to learn what SWE is all about! Meetings for the Fall 2018 semester will be held on Thursdays at 5PM in the Coe Room of the Memorial Union!

The Society of Women Engineers hosted the annual Engineering formal on February 10th.  The formal was open to all majors, and was held in the Buchannan Alumni House on campus.  Attendees enjoyed food, a DJ, and a cash bar for those who were over 21 years old!

On Saturday January 27th some SWE Members ventured to Hirundo’s Annual Winter Fun day. Our members had the opportunity to volunteer to make the event a success!

SWE partnered with Margaritas in Orono on November 27th to host a fundraiser for our organization.  Twenty percent of your dinner bill was donated to our organization, so thanks to everyone who attended!

SWE partnered with Engineers Without Borders to host a Thanksgiving celebration on November 19th.  Everyone enjoyed a potluck of homemade food, and it was great socializing with another Engineering club on campus!

The Society of Women Engineers hosted another successful Certificate of Merit! The Certificate of Merit recognizes the top females in STEM education from high schools around Maine. Over breakfast, the girls got to hear from our three speakers about their paths in engineering. Many thanks to Tricia Evangelista, Amanda Bessette and Professor Karissa Tilbury for their fantastic talks!

The Society of Women Engineers volunteered at the pop-up Makerspace Family Night hosted by the Challenger Center in Bangor on November 9th.  Families had the opportunity to program robots, create duct tape shoes, design with a giant spirograph and make felt bookmarks.  Many thanks to the Challenger Center for these pictures of our SWE Members!

The Society of Women Engineers returned home to Maine with a little extra! Our section won the collegiate SWE Mission Award at the Silver level at the WE:17 Convention! This year our group traveled to Austin, TX to participate in the largest conference to date. Our members attended multiple professional development sessions and talked to companies at the career fair.  Many thanks to all who donated to make this possible! 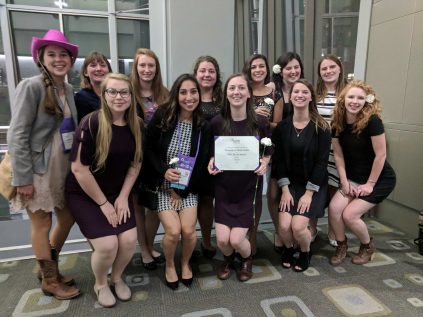 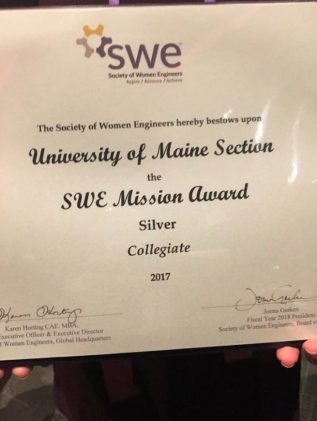 The Society of Women Engineers volunteered at the Solar System Walk on October 5th.  The Challenger Center in Bangor hosts the event along the Banger waterfront, and participants get to learn all about space as they move from station to station.

The Society of Women Engineers hosted a SWE-esta on Thursday, September 7th from 5-7pm in the North Pod of the Union.  It was a great opportunity to socialize with our UMaine section, as well as meeting some potential new members!

SWE UMaine traveled to the University of Connecticut to attend the SWE Local Conference on February 24th. Throughout our time there, Region F hosted a number of keynote speakers to help SWE members build their professional skills, as well as a small job fair with a number of notable employers.

The annual Engineering Formal, hosted by SWE UMaine was held this past February at the Buchannan Alumni House.  The formal was open to students of all majors, not just those in engineering!  The event had a DJ, complimentary snacks, and a cash bar for those guests 21+.

SWE volunteered at the Challenger Center’s Superhero Science Night on January 26th. SWE members organized three participation stations for young school students to learn about the science behind superhero powers. The Challenger Center is a great place to inspire children to pursue STEM fields and we’re always happy to volunteer our time in the community!

The annual Engineering Job Fair, hosted by the University of Maine took, place in the New Balance Recreation Center on October 19th. Over 100 companies and universities were present and a number of SWE members volunteered their time checking in students and employers and selling College of Engineering logowear. Many members even had the opportunity to speak with companies about summer internships and future employment!

SWE volunteered in conjunction with the Challenger Center in Bangor at their annual Family Science Night at the Bangor Waterfront on October 6th!  SWE Members helped young students walk their way through the solar system, stopping at planet stations along the way.

New to UMaine was CareerFest!  On September 28th from 11:00 a.m until 3:00 p.m, employers were located on the University Mall to give career advice.  Students were encouraged to stop by to get their resumes reviewed, get some interview tips, and indulge in some free food!

Members of SWE tabled at the annual Student Organization Fair, held by the University of Maine. Collegiate clubs gathered together on the University Mall to promote their organizations and to get students involved on campus. SWE members served lemonade and spoke to prospective members about joining!

Once again, SWE UMaine attended the WE16 Conference, held this year in Philadelphia, Pennsylvania. Fifteen members of our university section attended two exciting days of seminars and sessions and one of the world’s largest career fairs for engineering students and professionals. We even won an Outstanding Collegiate Section Award at the Silver Level for the second year in a row. Thank you to those who supported this trip! 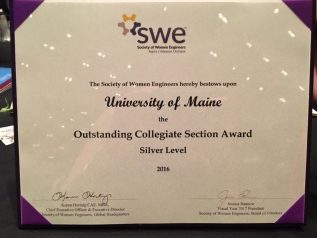