The UMaine School of Performing Arts with the support in part by a grant from the UMaine Cultural Affairs/Distinguished Lecture Series Fund presents: 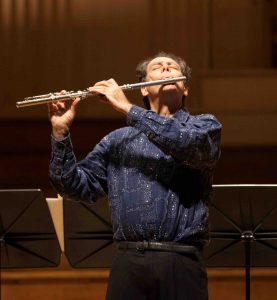 World renowned as the leader in contemporary music for flute, Robert Dick embodies the ideal of the Renaissance artist. With equally deep roots in classical music old and new and in free improvisation and new jazz, he has established himself as an artist who has not only mastered but redefined the instrument. Robert Dick has utterly dispensed with preconceptions about what a flutist should sound like and what a flutist should play. More than any flutist ever, Dick has reshaped the musical possibilities of the instrument, creating many thousands of new sonorities. Since he began composing and improvising in the 1970s, he has pursued the core idea that acoustic instruments are capable of sonic vocabularies and musical expression extending far beyond their traditional sonorities and musical roles. He draws from the jazz tradition, world music (especially Indian and African), electric and electronic music and natural sounds. His compositions, striking in the intensity and originality of their emotion, structures and sound, have been recognized with a Guggenheim Fellowship, two NEA Composers Fellowships and many grants and commissions.

Robert Dick will also be conducting a series of public masterclasses:

All events are FREE and open to the public.

For further information or to register to participate in masterclass please contact Elizabeth Downing, 207.478.5683.