The Carlos III University of Madrid (UC3M) has one of the top ranked Business Schools in Spain (Ranked 3rd) and one of the top in the world, as has recently been ranked in the top 150 business programs in the world by the Financial Times. The university was founded in 1989, and is one of the seven public universities in Madrid. UC3M has around 17,300 students and receives more than 500 international students. Carlos III is divided into 2 small campuses in Getafe and Leganes that are located just outside of Madrid. The Engineering programs are located on the Leganes campus. Business is located on the Getafe campus.

Watch a video about UC3M.

Spain is a diverse country located in Mediterranean Europe and is the second largest country in Western Europe (behind France). With great beaches, fun nightlife, many cultural regions and historic cities, Spain makes a great destination for any kind of trip. Spain has hundreds of interesting cities. Some of the major travel destinations include the capital Madrid, Barcelona, Seville, Cordoba, Granada and Valencia.

Some of the important historical sites include the Alhambra, Granada, the Guggenheim Museum, Bilbao, or the Roman Aqueduct of Segovia. There is everything from lush meadows, snowy mountains, huge marsh and salines, and some desert zones in east Andalusia. Spanish music is often considered abroad to be synonymous with flamenco, an Andalusian musical genre, which, contrary to popular belief, is not widespread outside that region. Alongside music, art is also very culturally influenced as well as the architecture, food, and literature.

The towns of Getafe and Leganés, where the two campuses of UC3M are located, are just 6.2 miles  south of the city center of Madrid. Both towns have a population of over 150,000, and all the necessary medical, shopping and recreational services. Travel to Madrid is easy using the extensive public transportation system. Students can purchase a metrobus ticket, which is valid for ten rides on either the bus or metro system, or a transport card (abono de transportes) that permits unlimited travel using any combination of public transport. This card covers the route between the center of Madrid and the Carlos III University area. The Guadarrama and Somosierra Mountains enhance the climate of Madrid, virtually guaranteeing pure air and clear skies during most of the year.

Madrid is a very lively city and houses many libraries, universities, museums (check out El Prado), art galleries, theaters, cinemas and congress halls for cultural events. Historical monuments and attractions of the old area of Madrid are also of great interest, especially those that were built under Austrian and Bourbon rule. Students may enjoy Madrid’s nightlife including shows, pubs and cabarets. Outdoor enthusiasts can participate in a number of activities such as skiing and hiking on the nearby mountains.

In Spanish: all fields of study are available in Spanish. Students who want to take courses in Spanish with local students must have 5 semesters of college level Spanish.

Estimated budget for a semester at Carlos III University of Madrid.

Students enroll in regular university courses. Exchange students may select from any of the courses offered in English each semester. Students who possess Spanish language ability are also eligible to complete the 8-10 additional courses offered solely in Spanish during any given term. The average course load at UC3M  is 5 courses (30 ECTS). Exchange students must register for 24 – 30ECTS credits (12 – 15 UMaine credits) to maintain full-time academic load while abroad. UMaine exchange students can request from their UC3M professors to take their final exams before the winter break and then return home in time for their spring semester.

Carlos III University has paired up with Sociedad Público de Alquiler to supply and help the university community members to find accommodations. Living options include student dorms, halls of residence, apartment rentals and a homestay program.

Students attending for a full year may apply for on-campus accommodation. Semester only spots in on-campus housing is rare. Most students find their own housing in Madrid, either in apartments or in a homestay. There are helpful links provided by UC3M that can be found on their Housing Assistance website. 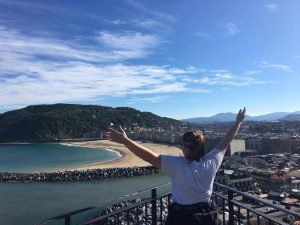 in a culture completely different from my own. Studying abroad allowed me to see the world from an international perspective and taught me to become more independent. Spain is a beautiful country with a lot of history and incredible sights. Studying abroad was the best decision I made as an undergraduate.” -Sydney DuEst, Fall 2016